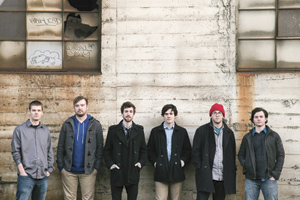 To celebrate their upcoming record release, The Weather Machine just unveiled a psychedelic lyric video and song – and the wait seems well worth it. As Long As We Get Along is the first studio performance to encapsulate the band’s wild, tongue-and-cheek, heart-on-your-sleeve attitude.

This is The Weather Machine’s first release since December 2012, when they debuted their b-side Slow Dance Slow in collaboration with Portland label Tender Loving Empire.

Sisters native Slater Smith was instrumental in the group’s formation. Slater attributes his singing and songwriting abilities to the popular and award-winning Americana Project. “I wouldn’t be playing music if it wasn’t for the Americana Project,” he remarked.

The highly successful program was developed to inspire the creativity of Sisters’ youth, and to demonstrate the cultural and historical significance of American roots music and cultural expression. Entering the program as a sophomore, he began playing the guitar and penning songs. Brother Tanner Slater also participated in the Americana Project and was heavily involved in the Sisters jazz program.