Head out to Sisters on Saturday night for HarmonyHouse’s concert with guitarist and humorist Chuck Pyle – The Zen Cowboy.   Story by Jeff Spry 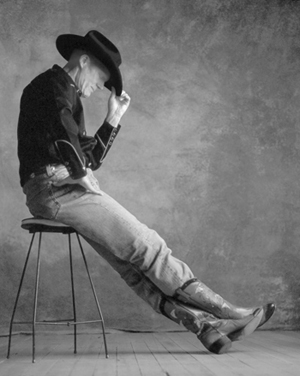 Pyle’s off-beat wit and catchy melodies are infused with politics, pop culture and a warm helping of good old-fashioned cowboy poetry. Grab a date or a fun friend and experience the soothing hospitality of Doug and Katie Cavanaugh, whose rustic concert venue has provided some memorable musical moments in Central Oregon.

“What a way to end our 2011-2012 season,” said Katie.  “Chuck has graced our stage and charmed our audience here at the HarmonyHouse a few years back.  He has also headlined at the Sisters Folk Festival in 2009.”

Pyle hails from Colorado and has performed on Austin City Limits, at Bill Gates’ home and music festivals around the globe. During his 40-year career his original songs have been recorded by John Denver, Chris LeDoux, the Nitty Gritty Dirt Band and Jerry Jeff Walker. He sees what’s best about America, writing ballads about love lost, forgetful cowboys, heroic highway patrolmen and bumper sticker blues.

Bring wine, appetizers or a snack to share.  Doors open at 7pm. Music begins at 8pm. A suggested donation of $15 is appreciated and goes directly to the artist.  HarmonyHouse is located at 17505 Kent Road in Sisters.  For questions or directions call 541-548-2209.