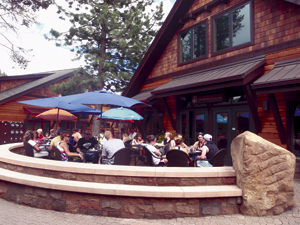 “Doing research. Checking out the menu,” my friend texted me after I had confirmed that we’d be heading to the Sunriver Brewing Company’s Brewhouse. “They have a few steelhead specialties. Nom. Nom. Um Portobello fries? I am so there.”

Yes, we were off to a promising start. As we entered the Sunriver Brewing Company’s Brewhouse on a chilly fall evening, the staff’s warm, friendly greeting and the pub’s neighborhood vibe helped to immediately warm up one under-dressed reviewer and her three friends.

No sooner had we settled in than the great beer debate began. To be fair to my beer-loving friends, the Brewhouse offers seven local beers on tap in addition to the four brewed in-house.

So many beers, so little time. We started with a flight of Sunriver Brewing beers, followed by a flight of IPAs before finally settling on our individual beers selections. Luckily, we hadn’t waited to choose our appetizers. They arrived while we were still in mid-flight. “This takes pub food to a whole new level. Look how beautiful,” exclaimed my texting friend.

She was right. The appetizers were lovely to look at and I’m here to tell you that the monster Portobello Fries are as lovely to eat as they are to look at. “This is ridiculously good,” the texter announced as she swiped her fried mushroom wedge through the balsamic reduction drizzle before dipping it in the accompanying horseradish cream sauce.

We also tore into the soft pretzel and the accompanying SBC Ale Fondue. Literally. The warm dip managed to be cheesy without being heavy, and the beer imparted a nice hint of toasty sweetness. Then we figured out that we could dip the Portobello Fries into the cheese. Need I say more?

It was time to explore the steelhead options. We all preferred the flavorful, grilled steelhead sandwich, with its toasted sesame cream cheese and fresh lemony lemongrass remoulade, to the steelhead fritter appetizer. No texture problems on the sandwich—the fish was fresh and tender. We also liked the super chunky steelhead chowder, which instead of being heavy was broth-based with just a touch of cream.

We continued on the fish vein with the fish street tacos. Despite flour (rather than more traditional corn) tortillas that were a little tough, the dish worked thanks to the pan-seared cod dusted with a Latin spice rub and served with chipotle aioli and a salsa fresca.

After so much fish, I was looking forward to trying a burger. The Lava Butte Burger had good spice and the certified natural Angus beef was deemed tasty if not downright fantastic by the group. The fact that it was garnished with homemade stout barbecue sauce, pepper jack cheese, beer-battered onion rings, sautéed peppers, smoked jalapeno and chipotle mayonnaise didn’t hurt a bit.

“Save room for dessert,” our terrific server Sarah Knight advised. Are you kidding? In addition to all the food I’ve already talked about, we had all had our way with the fries (regular and sweet potato), both of which were sinfully good. Still, a girl (or four) has to do what a girl has to do. So we just said yes to the pumpkin chocolate cheesecake with its walnut graham-cracker crust that had me envisioning Thanksgiving dinner in a whole new way. We also said yes to the semi-deconstructed, buttery spiced-rum bread pudding with a caramel soul and a vanilla-bourbon topping, served with a shot of whiskey on the side. As I mournfully watched the desserts and the whiskey disappear, two of my friends asked the exact same question at the exact same time.

The answer when it comes to the desserts, which are homemade, is a resounding yes.

And here’s the real kicker. Not only can you drink terrific locally brewed beer (or cocktails since they have a full bar) and eat food that ranges from good to sublime, there’s a young children’s play area. This place may not know your name (yet), but they certainly know the name of this game!

Sunriver Brewhouse
Located off Beaver Drive in the Village at Sunriver next to the Country Store
541-593-3007
sunriverbrewingcompany.com
Hours: Open Daily, Sunday – Thursday
11am -10pm; Friday-Saturday 11am – 11pm
Owner: Marc, Karol and Brian Cameron