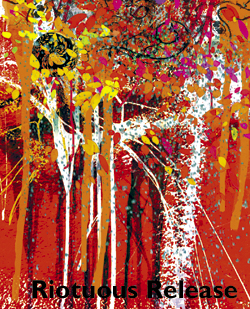 Artist Dorothy Freudenberg has immersed herself in the unlimited possibilities of digital art. A collector of textures, colors moments captured on camera, Freudenberg combines her external observations with an internal vision to create new realities that radiate with color.

With a foundation in black white photography, Freudenberg first discovered digital art in the early 1990s as she was digitizing her photography. “When I got on the computer I had a color palette; [color] was something I had never really thought about before,” she said.

“I had been instantly drawn to black white photography because I think it is a reduction in terms of photographic art, it requires immense insight to make your statement make it clearly cleanly; it also tries to avoid getting caught in the trap of just being pretty.”

Experimenting with color in a digital setting opened an entirely new avenue for her self expression, “I realized a subject could speak more profoundly eloquently sometimes in a different color than its given color; that allowed me to break the rules about what I thought things should be get out of the photography box.”

Freudenberg soon began working in layers as her skills improved, she started constructing her pieces. Working from photos, pieces of graffiti she found on derelict walls, textures bits of r omness, her photography changed to encompass gathering elements that would become part of art pieces. “I saw the world in a different light. I didn’t stop looking at the whole but started collecting pieces like a kid going out with a little goody bag getting pine cones pine needles,” Freudenberg said.

“I’m still like that kid…I’m doodling when something catches my eye, I open it up it seems to create itself I’m just facilitating. My h s move the objects around until they find their desired place.”

Freudenberg calls her digital art a world of metaphor, emotion expression. It can reveal her innermost thoughts feelings with results that are as much painterly as photographic, “I am once more painting–this time with pixels light.”

The benefit to working on her laptop is the ability to take her entire art studio wherever she goes. Because she is a busy gr mother, the most consistent time Freudenberg can carve out for herself is in the late evenings, or even in the middle of the night.

Her spirit is one of continued exploration experimentation Freudenberg has only the limits of the imagination in which to create. “I am excited to have a tablet; some of the art that is coming off of those is very spontaneous, I have been thinking of ways to use that add a new element [to my art.],” said Freudenberg. “Another thing I would like to explore is actual painting on some of the layers of the pieces so that it becomes truly a mixed media.”

Freudenberg is a fan of serendipity…when a postcard promoting the artists at Tumalo Art Co. came out for the November 4 art walk, her piece, At a Crossroads was presented next to Paul Alan Bennett’s painting, Our Conversation Drifted…she was struck by the similarity in colors between her poppy his sleeping figure decided to collaborate on a digital piece which became Dreaming of Giant Poppies.

“It wasn’t intentional, just a what if,” said Freudenberg of her collaboration. “I am very open to ideas images people environment. That is the key, being willing to take risks try different things.”

Her one challenge in creating digital art has been to find the appropriate market, “Because of the ease of this medium the facility in which you can create, you wind up creating or going to forms of expression that are out of the box or unique or unusual it is hard to find an audience sometimes because in any given area people have a certain type of art taste or a certain thing they want to see.

“I’m not interested in portraying the regional l scape so much as to express a state of mind or a thought process or some issue I’m working with or wrestling with the medium is simply the metaphor for the process,” said Freudenberg.

She has gotten an excellent reception when showing art in Portl would ultimately like to exhibit in larger metropolitan areas on the West Coast.

Freudenberg is a member of the Tumalo Art Co. in the Old Mill, Don Terra in Sisters Art Works in Tumalo. She will be the featured artist at Franklin Crossing in February will also be showing work at the Partners in Care hospice facility in Bend.