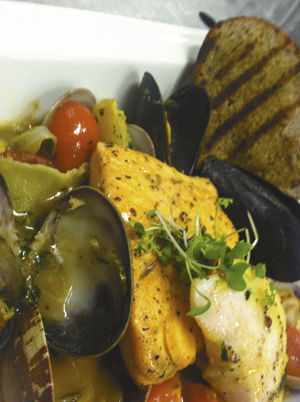 I would have never known that this was the first time most of the COCC culinary students had even met—let alone cooked for—Elevation executive chef John Nelson. Although I had been advised to patronize culinary school restaurants closer to the end of the term than the beginning, my friends and I had jumped at the chance to be guinea pigs on the students’ very first night of the spring term, before the restaurant even opened to the public. I knew that John, whose cooking I ate as often as possible when he had his Blue Olive restaurant at Brasada Ranch, would make sure his crew delivered, no matter how green they might be.

We started the evening with sparkling wine served in chilled champagne glasses—a Bend first—and John’s unparalleled crab cakes served with two sauces—a watercress crème fraiche and a red radish mignonette. The sauces took the crispy crab cakes to a whole new level, but they would have been absolutely delicious even without.

“The secret is there’s no secret,” said John, who was born and raised on the Oregon coast. “Less is more.”

You’re not going to find corn, red peppers or much of anything besides silky lumps of crab meat in John’s crab cakes.

The chefs-in-training then brought out the two charcuterie platters that our table of four would be sharing along with a basket of rosemary flatbread crackers dusted with sea salt. I’m still trying to get over the fact that the house-cured prosciutto (think silky saltiness) and the Genoa salami, whose consistency reminded me of rillettes, weren’t store bought. Neither was the huckleberry mustard. “Mustard is my specialty,” announced returning student chef Tracy before quickly adding, “After Chef trained me.” Wedges of Rogue Blue and Rim Rock goat cheese, pickled cauliflower with roasted red pepper and jalapeno, and pickled butternut squash that is far superior to any other butternut squash preparation I’ve ever tasted rounded out the plates and our taste buds.

Next came the Oregon Spring Salad. What a visual—and taste—treat! On one end of the long, narrow white plate, a mound of vibrant wild greens including miner’s lettuce, watercress and verbena accented with micro fennel and red vein sorrel and lightly dressed in a sage honey lemon vinaigrette. On the other side, multi-hued and earthy fingerling potatoes and a port-poached ramp. A soft-poached egg yolk anchored the plate, the pale yellow ball turning golden orange and runny once punctured with a fork.  “This salad explains John totally,” said my friend Jake, who worked and trained under John before taking over as executive chef at Kebaba. “The local ingredients that find their way together in nature and the way he laid them out is a totally John juxtaposition.”

By the time the main courses hit, we guinea pigs were feeling, well, slightly piggish and full. But not too full to continue on with the mission. We tried the fish—chunks of halibut and salmon poached in a fennel, cherry tomato and vermouth broth created by day chef/instructor David Trask—who helped develop all the dishes on the menu—and served with steamers and mussels. The dish was a little tame for me, but my friend Gay loved it. To be sure, every element of this coastal voyage was perfectly cooked.

We were probably lucky that John chose not to serve the Wild Mushroom Risotto that’s on the streamlined menu that night. We might not have survived, especially considering how well the grilled pork tenderloin went over. Brined in smoked green tea, it unexpectedly reminded me of tea-cured duck in terms of both texture and taste. The secret (and there actually is one) to the tenderness lies in its 1 ½ -hour sous-vide bath followed by flash grilling. “The pork is through the roof,” said Jake. Then there was the huckleberry chutney and a puree of sweet potato and leek. Double through-the-roof yum.

We ended the meal with a chocolate tart in a brown butter and hazelnut crust with a pear poached in white wine. When the culinary staff realized that they didn’t have a dessert for us, one of the students had just whipped it up.
What’s not to love?