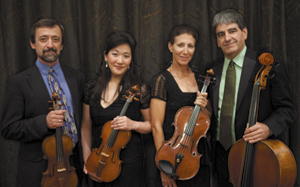 The fifth season continues with the Crown City String Quartet joined by pianist Bryan Pezzone performing a variety of music inspired by love and romance on Valentine’s Day.

10below Restaurant will be offering a complimentary glass of champagne, chocolate and a rose to High Desert Chamber Music (HDCM) concert-goers.

In addition, the OXFORD hotel will offer a special HDCM guest room rate for the evening. This event is brought to you by the Norma Dubois and Julie Moe team at Cascade Sotheby’s International Realty.

The Crown City String Quartet has been the premiere group featured in the HDCM Series and an audience favorite since their Central Oregon debut in the HDCM inaugural concert. Founded in 2007, their performances have been praised as “sublime” and “simply moving and spectacular.”
Based in the Crown City; Pasadena, California, the members have worked together in the motion picture and TV recording studios, and are current and former members and principal players of some of Southern California’s most renowned music organizations, including the Los Angeles Chamber Orchestra, Hollywood Bowl Orchestra, Pasadena Symphony, Los Angeles Opera Orchestra and the San Diego Symphony and San Diego Chamber Orchestra.