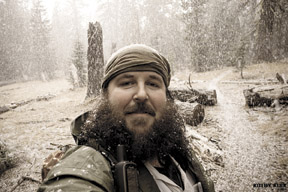 “I think we are living in a period of time where there is so much more to be discovered than one would think…I’m hoping my art motivates people to get out there and see it for what it is, while we still can. Get out there now and hopefully that appreciation will lead to protection.” – Kolby Kirk

Photographer Kolby Kirk had an agenda. Hike 100 times and 700 trail miles by 2014, while commemorating each hike by creating a number out of natural materials. Sounds ambitious, right? But more than the impressive number of trail miles logged, is the true delight he finds in his wilderness experiences, and the time and craft that goes into creating each 5-6” number. 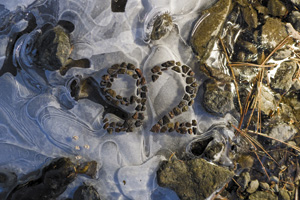 Kirk’s drive to hike can be traced back to 2009. That May while living in Los Angeles, he became committed to getting into better shape by coming up with a resolution to hike 100 times before the end of the year.

“When I create a goal I want it to be just beyond my finger tips…I thought 50 was a doable number, so I doubled it,” he laughed. “I set some guidelines, each hike had to be at least two miles and had to be on a trail.” On each hike he took a picture of himself holding up the number of the hike…essentially a progress report of his fitness progression.

By the end Kirk had created a mosaic of his 100 images of the hikes that spanned three countries and three states. “That changed my life,” Kirk said. “It propelled me into this life of hiking and nature, I love it.”

In 2010 the goal became 500 trail miles, and in 2011, he spent 159 days walking from the Mexican boarder to Etna, California, or 1,700 miles on the Pacific Crest Trail (PCT). “I learned this while traveling: where I was, was where I should be. The hike really energized me artistically,” he explained. “I kept journals, over 800 pages of writings and drawings and sketches, and took a lot of photos.” The trip manifested in a creative video Kirk produced called Condor’s PCT Adventure in 3 Minutes (http://vimeo.com/34766625).

Although Kirk had been living in Southern California, he is a third generation Bendite and decided to move here in 2011 after hiking the PCT. “I started thinking about a new goal to have…so combined my 2009 goal with the 2010 goal and gave myself 17 months to hike 100 hikes and 700 trail miles…on average it would be a seven mile hike every five days for 17 months.”

His first hike was to Mirror Lake where he made his first number. “I wanted to use something that I found on the hike to make the number and leave it there,” he explained. “I didn’t want to disrupt the ecology, so I didn’t pull out plants, but pruned them.”

Creating the numbers started as a way to document his hikes, similar to the 2009 project, but soon became his favorite part of the goal. “Not only did I learn a lot about the area and can identify many plants, but it really opened my eyes to what was on the ground. I love looking at grand views, but I could spend an hour on a square yard of the trail looking at lichens and mushrooms,” he said. 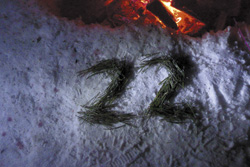 Kirk will spend about 40 minutes creating each number and is very intentional about not only the materials he uses, but the background for the image. Number Twenty-Two was created on New Years Eve next to a fire pit at Virginia Meissner Sno-Park. “The photos tell a story,” he explained. “You see the footprints and spilled wine… Later when I see the numbers I’m thinking of the hike as well. Hike 100 will be there too.”

Always up for a challenge, Kirk has been getting creative with how he makes the numbers, and has been experimenting with three-dimensional or sideways numbers. “I need to gain some engineering skills to create some of them,” he laughed.

Kirk explains there is an incredible amount of detail in each photograph, and plans to make prints of each number. He has also include a puzzle in some of the photos. “I like puzzles, I grew up with books which have something hidden in the artwork… I’m waiting for someone to discover it. I love that, it makes me excited!” he exclaimed.

Kirk will be exhibiting his prints on First Friday February 7 at Tin Pan Theater. http://2013.100hikes.com, www.thehikeguy.com.

Condor’s PCT Adventure in 3 Minutes from Kolby Kirk on Vimeo.