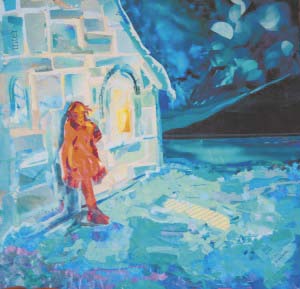 On September 16, 8– 10pm Laurel Brauns will celebrate the release of her fourth full-length album, House of Snow. The album was produced arranged by Douglas Jenkins, creative director of the Portl Cello Project features many of Portl ’s finest musicians including Sam Cooper (Horse Feathers), Skip vonKuske (Vagabond Opera), Jenny Conlee (The Decemberists.)
After listening to the album, Chris Dahlen of Pitchfork Paste Magazine wrote, “Laurel Brauns writes some of my favorite songs, the way she sings them makes me shiver.  Her new disc is lovely, strong, haunted, likely her best yet.”
The album is best classified as indie-folk with elements of neo-classical, organic gothic earth pop. Water emerges as the most prevalent theme weaving the songs together. The title track House of Snow is a dreamy tale about a float down the Rogue River in Oregon. Doldrums is a depiction of the Great North Pacific Gyre, a swirling patch of plastic suspended in the Pacific Ocean.
Local musicians Erin Cole-Baker, Mark Ransom, Patrick Pearsall Laurel’s sister Katie Brauns lend their voices to the song Doldrums which ends in a chorus crescendo, guitarist singer/songwriter Franchot Tone adds his jangly pop style to the last two tracks on the album.
The biggest local contributor was silent however. Kaycee Anseth is the visual artist who was commissioned to do the front cover, was so inspired by Laurel’s demo of songs, that she created the back cover as well.
Laurel has opened for Loch Lomond, Horse Feathers, Weinl collaborated with the Portl Cello Project. She recently had her song North 93 placed in the Fox TV series Traffic Light.
Admission to the CD release party at the PoetHouse in Bend is $5 or free with the purchase of the album ($15).
www.laurelbrauns.com/blog/?p=580, laurel@laurelbrauns.com for a password to download the whole album or to request a hard copy.