Get in the spirit of spring this winter with a special Valentine’s performance of McManus In Love, February 16 the Tower Theatre. 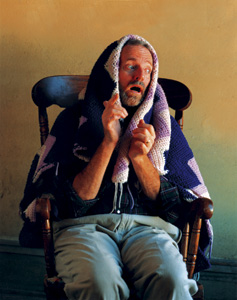 The one-man comedy, written by nationally renowned humorist Patrick F. McManus, stars acclaimed Washington actor Tim Behrens as a cast of 15 characters, including a bat, a bear, a bicycle and an eccentric assortment of humans from McManus’ fictional childhood.

McManus In Love follows the antics of the young Patrick and his pal Crazy Eddie Muldoon as they discover their fear of the dark is child’s play compared to their fear of girls! Nevertheless, they keep wondering about love, romance, marriage and this thing called a “first date” that warps your personality forever.

Along the way, Pat and Eddie pick up personal grooming tips from old woodsman Rancid Crabtree (who takes a bath once every leap year), learn dating moves from cousin Buck (who’s slightly smarter than celery) and experience the thrill of a first date with Melba Peachbottom, the prettiest girl in the county.

McManus was the humor columnist four decades at Field and Stream and Outdoor Life magazines, is a professor emeritus of Eastern Washington University and has sold five million copies of 24 self-penned books.

Behrens, from Spokane, WA, has depicted McManus’ comedic characters in a repertoire of five McManus plays in tours to 23 states and Canada, for more than 450,000 people. The Billings (MT) Gazette described Behrens as “brilliant, amazing; kind of like a cross between Bill Cosby and Mark Twain.”

The Tower Theatre Foundation owns and operates the historic stage in downtown Bend. The Foundation’s mission is to provide performing arts, civic, educational and social events that enliven and enrich the lives of all Central Oregonians. Membership, program information and individual and group tickets are available at the box office (835 NW Wall), by phone (541-317-0700) or online (www.towertheatre.org). Details on events are also at facebook.com/TheTowerTheatre.