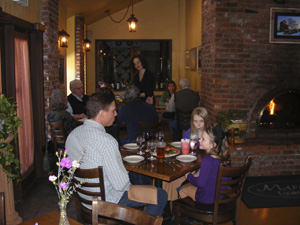 Marcello’s Italiana Cucina, which has been in Sunriver since 1980, is an institution. Institutions can often live up to their billing, but they seldom surprise. So while I expected quality upscale Italian-American food during the dinner I recently shared there with friends, I didn’t expect to be wowed by unanticipated taste combinations.

We started our meal well, if predictably, with fried baby calamari served with marinara and Dijon cream dipping sauces. “Anyone who likes calamari would like this dish,” my friend Leah said of the tasty, lightly fried baby squid.

Our very next shared course—the risotto special with chicken breast, pancetta and hedgehog mushrooms—provided a hint of things to come, with brilliantly flavorful basil and tomatoes adding a lovely fresh contrast to the creamy rice dish. I would have been even happier without the chicken, which seemed superfluous.

After sharing a disappointingly unremarkable Caesar salad, we moved on to our main entrees, which we shared by eating neatly and rotating to the right.

“Someone has to order the Pork Osso Bucco,” said Thad Lodge who owns Marcello’s with his sister Autumn Lodge Persinger.

My mother used to adore Osso Bucco, a Milanese specialty traditionally made from veal shanks and vegetables braised in white wine. The version at Marcello’s features pork shank slow-roasted with mushroom and jalapeño in a Dijon-Chianti cream sauce. I knew the dish would be special when Leah passed it over with the greatest reluctance.

“I wanted to fight to keep it, but I thought that would be inappropriate,” she joked.

Ginger Aguierre, owner with husband of Ginger’s Kitchenware, echoed her enthusiasm. “They put a nice char on the pork before slow-cooking it so that it’s fall off the bone.”

When it was his turn, Jaime Aguierre, who’s about as serious a foodie as one can be, took a bite and then dreamily stared off in the distance. “That’s crazy creative. I don’t think I’ve had anything like it,” he announced after admitting that he hadn’t been able to imagine how the ingredients would come together. “It’s seared gorgeously and cooked to perfection.”

By the time the Osso Buco got to me, I had nothing left to add. So I just ate, happy to discover garlic-infused mashed potatoes that were still piping hot under the stunningly delicious pork.

Thad had also told us that Marcello’s customers had been returning for decades for the Linguini con Carne, opting to combine (rather than choose between) the garlic-cream and homemade marinara sauces. “It’s not our most beautiful dish, but people love it,” Thad said. I can see why. The sausage contributes the perfect amount of heat along with a hint of fennel, the carrot in the sauce adds a bit sweetness, and the cream tops off a dish that is the embodiment of comfort food.

Having been told that restaurant could accommodate any kind of food intolerance, we decided to see whether the staff would be open to a little mix and match. The resulting Filet Mignon (instead of chicken) alla Romana—topped with spinach and mushrooms in a light gorgonzola cream sauce—was brilliant. “I actually want to take a container of this sauce home for breakfast,” announced Leah. That’s when I resolved to claim all the leftovers.

Our last entrée, the Capellini di Mare, was the least impressive. Both the pasta and the jumbo seared scallops were perfectly cooked, but the under-seasoned tomato cream sauce lacked that wow factor.

The same certainly can’t be said of the house-made desserts, which were spectacular. “Good thing I don’t live in Sunriver,” I thought after tasting the cheesecake followed by the Tiramisu, which is made with pound cake and sweetened mascarpone cheese layered with espresso, rum, Crater Lake hazelnut-espresso vodka and chocolate sauce. On the other hand, Sunriver is only a 20-minute drive from Bend. Besides, Marcello’s gives locals (defined as Central Oregon residents) a 10 percent discount off their already modest prices.

I’ll see you there.