Bank of the Cascades and the Redmond Chamber of Commerce & CVB announce the Music on the Green entertainment schedule for the 2013 season. This is a free summer concert series held in Sam Johnson Park on alternate Wednesday evenings from 6-7:30pm. Food vendors will be available. 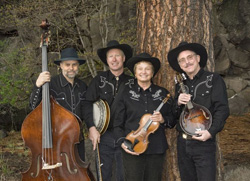 July 10 THE PITCHTONES
The Pitchtones are a genre-defying acoustic band known for their humor, musicianship and powerful vocal harmonies.  Indeed, a Pitchtones show isn’t exactly a sit-still-and-listen kind of experience. The band’s sound is rooted in bluegrass, folk and western swing, with regular forays into cajun/zydeco, rock ’n’ roll and beyond.

July 24 THE JACOB MERLIN BAND
From the first note to the grand finale, Jacob Merlin takes the audience to a new depth of musical experience with his energetic, youthful approach to R&B, blues, soul, and funk music. The Jacob Merlin Band has opened for the Cherry Poppin’ Daddies, Curtis Salgado, Storm Large and Tim Reynolds.

August 7 CARRIE CUNNINGHAM & THE SIX SHOOTERS
With years of performing experience, Carrie religiously draws the audience into a wondrous musical experience that has them walking away certain that they have just witnessed a rising entertainer on her way to stardom. Carrie has joined entertainment forces with Collective Soul, Jake Owen, The Bellamy Brothers, Rich McCready, Sugarland, Diamond Rio, Carrie Underwood, Brad Paisley and Reba.

August 21 LORI FLETCHER with the ROCKHOUNDS
Lori Fletcher joins The Rockhounds and brings along her backup singers Diane Turnbull and Eve Harry, appropriately renamed for this ensemble as “The Chew Toys.”  Lori Fletcher’s love of the blues and R&B enticed her to team up with the Rockhounds for various events that call for a little more upbeat, danceable band. Together, Lori Fletcher & The Rockhounds featuring the Chew Toys makes for a powerful dance band, led by strong vocal harmonies and excellent musicians!