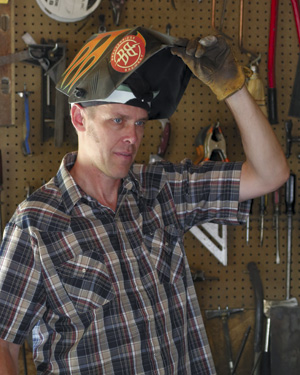 “For me the artist’s journey is an internal one. And the internal spaces are vast – and as every bit as full of mystery and unexplored territories as the outer universes. Art in all its forms are attempts to map or gain insight on this internal universe, something as critical for our species to understand as our impact on the outer world.” -Mytchell Mead

Contemporary Fine Artist Mytchell Mead has found becoming fully immersed in the present opens oneself up to the serendipitous nature of life, and thus, art. Through his varied past and internal journeys traveling the world in the tech-industry, studying non-western esoteric cosmologies and traveling the country by bike, Mead’s sculptural pieces not only build on his experiences, but reflect his open-hearted approach to life, to adventure and to learning.

Mead is the featured artist for August at Paul Scott Gallery in downtown Bend, and will be present at their First Friday ArtWalk reception on August 1.

His journey to becoming a skilled sculptor began at an early age as Mead worked and learned alongside his father, a talented metal worker. After getting his MBA, he worked for a high-tech firm and traveled all over the world. “Trips to Japan gave me an appreciation for Eastern thought and art. Europe instilled a classical regiment and South America brought out the desire to draw in earth and craft elements,” he said.

Following those experiences, Mead rode his bike cross country only to find himself laid off of his job upon his return. He spent the next five years interning with a yogi, meditating, learning Sanskrit chant and exploring ancient texts. “The content of study helped to assimilate the experiences from the bike trip, and the artwork seemed to come next of its own accord,” Mead explained.

“What fascinated me in those cosmologies was that they barely differentiated between the internal and external experience; they just flowed from one to the other.”

Mead’s flow lead him to open a bike shop in Seattle in the mid 1990s, conveniently located next to an artist-owned foundry. He soon found himself working in metal and within a year it became an impromptu gallery for his work. However, a pivotal moment in his artistic career came when he and his future wife set off for a bike trip across the country in 1999.

“We got to New Mexico, in the middle of nowhere in Santa Fe National Forest, to see this incredible house on the border of the park. Some millionaire built an earth ship that had been vacant for three years.”

Mead climbed up to the house to find the owner there for the first time in years, and the gentleman offered the couple the opportunity to house-sit for the next two years. The beautiful earth ship just happened to be perched above the little house of Alberto Jose Castagna, Argentinean sculpture and artist.

“I got to know Alberto and spent several hours a day there over the next two years,” Mead explained. “In true classic form, Alberto first taught me to ‘see.’ He claimed that our eye is calibrated from birth for dimension, proportion, balance and relation by the human form.”

His experience learning under Castagna lead to Mead’s philosophy: when the artist’s eye and skills are honed, all effort becomes a clear channel for the flow of creativity.

“[I found] if you just step off the cliff and let yourself fall, you will be caught. It’s pouring that into the artwork day, by day, by day,” Mead explained, “that’s always what I need to do, I don’t need to look too far, or plan; what happens will happen at the right time.”
Since that time in New Mexico, Mead and his family moved to John Day, Oregon and he has been working primarily with sculptural forms of metal and wood. He gravitates towards abstract forms in his work, stating, “When you take something that is outside of words, or abstract…it takes you outside the thinking mind. It forces you into a place of growth.

“Many of my works explore the horizon line – very common in abstract art – but for me it’s about the merging of the two. Often there is a space at the joining point, where the ethereal meets the manifest, and for me this is a place to reside. It is here that we can draw from imagination to create in the manifest. It is the seat of creativity.”

Mead is represented by Paul Scott Gallery in Bend and a variety of other galleries around the west. “I was drawn to the natural and historic elements of wood he uses in his work, and how he transforms the color and texture of the steel,” said Paul Scott Gallery Director Kim Matthews.

Mead’s creativity leads him to constantly explore, and to relish everything about the process; recently he has started working with color and encaustics. “I’m always working to increase my curiosity and being an artist is nothing else if it’s about opening up that can of curiosity and letting it pour.”