If you missed him the first time he came to town now is your chance to catch Portland-based singer/songwriter and producer Peter Rodocker. 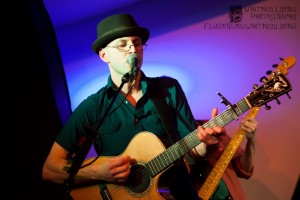 Rodocker is a Nashville-bred singer-songwriter, producer and performer who blends unexpected changes, roots music instrumentation and a bit of the foreign and familiar into seamless pop songs. Drawing from rock, indie and traditional Irish influences among many others, his songs are unapologetically hooky and melodic. He’s a little Gomez and a little Rufus Wainwright but his organic eclectic folk pop flavored with banjo, madolin and accordian is all his own. Rodocker has written, recorded, and produced music that has been featured in film, television and advertising and is currently playing in support of his new EP We’re Still Here. For more information about Rodocker or to listen please visit http://peterrodocker.com/ or http://peterrodocker.com/video/

Stephanie Slade’s newest project LAMP will open. Its good to see Slade back in the center stage this time playing bass and as always, her powerhouse vocals are some of the best in town. LAMP is a high energy funk-rock trio guaranteed to trip you out one minute and get you grooving the next. LAMP will play at 8pm followed by Peter Rodocker at 9pm (doors at 7pm) https://www.facebook.com/Sladeloveslamp/info

Volcanic is an all-ages venue all the time, and there is a $5 cover at the door. All proceeds from the door go directly to the musicians.

Volcanic Theatre Pub is located at 70 SW Century Drive (Next to GoodLife Brewing). The show is open to all ages and there is a $5 cover at the door. www.volcanictheatrepub.com.