It was the love of dance that drove Carolyn Brant to found the Terpsichorean Dance Studio & Company almost 40 years ago, and through her passion generations of dancers have come to exemplify the spirit of Terpsichorean.

Named for Terpsichore, one of the nine muses of Greek mythology meaning “delight in dancing,” the studio has grown from its humble beginnings in the basement of Brant’s home, to a beautiful 2,000 square foot space on Newport Avenue.

“I had danced all my life,” Brant explained, “and when I moved to Bend there were no dance studios.” She drew on her years of private study in Eugene and a college career in dance, choreography and dance education at Stephens College in Missouri and the University of Oregon, to open the doors of Terpsichorean in 1975.

Brant had six students for her first class, two of them her own children. “I had a little area down in the basement of the house we lived in, and I started teaching there,” she explained. “The next year I had probably 12 or 15 students, and every year after that it kept growing.”

She continued teaching in her remodeled garage for 20 years before buying the property on Newport Avenue in 1995. “My big success was finding that property at a perfect time,” she said. “We needed to grow.”

At the start Brandt taught ballet and tap, and as she became familiar with other dancers and teachers, she grew her staff and classes offered. Currently students of all ages can learn ballet, point, lyrical/contemporary, tap, jazz, hip hop, modern, creative movement and tumbling classes.

“Two of my teachers have been with me almost 20 years,” she said. “I have a really dedicated staff who have all either been with me for years or grew up in the studio.”

Brandt has given her all over the years and has decided it is time to slow things down a bit and retire. She is selling the studio to Dakota Weeda, a former student and current teacher who has grown up at Terpsichorean.

“When I decided it was time to retire I mentioned it at a teachers meeting last fall; within three days Dakota had the financing and it was probably the best choice I could have made. He’s really well rounded, he’s young and enthusiastic, and he wants to make it his life,” she explained. “I’m ready to not have it be my life!” she laughed.

The 19-year-old Weeda may be new to owning a business, but he has literally grown up in the studio. “I’ve know him since he was in the womb,” Brandt said. “His mom would come and watch his older sisters in class, and he later started dancing too.” 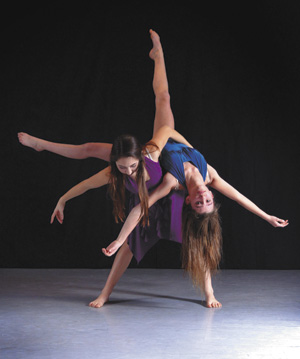 Brandt will stay on after Weeda takes over on July 1 and help in the Terpsichorean dance-wear boutique, but has visions visiting the beach and just simply having more time in her day. “It’s been an all consuming life, I was lucky when my kids were little because they were right there and involved in it. It later got so big and then it was all consuming.”

“Terpsichorean feels like a family business,” Weeda explained. “For years [I and my two sisters] took classes, and slowly we became teachers as the need arose. It’s been a crucial part of our family culture.

“The studio has been in my life my entire life, I feel like it’s a very close member of my family,” he said. “What it provides for the community and the students is very important. Only about two percent of our dancers will actually pursue a professional career, but the whole challenge of learning to be a performer teaches confidence and discipline that you can take into other areas in your life.

“Many former dancers leave for college and are very successful. I attribute that to the constructive outlet they have in the studio, and it’s important to keep providing that for the local community.”

Weeda’s training has come primarily from a lifetime in the studio, but he also enjoys training with traveling workshops like the Monsters of HipHop. He has taught at other studios in the area and has especially enjoyed teaching and choreographing for musical theater in Bend.

“So far my portfolio has been with 2nd Street Theater and Stage Right Productions…David DaCosta has commissioned me to be the choreographer for the company,” he said. Weeda choreographed the recent smash hit, Spamalot, that appeared at the Tower Theatre in 2013.

Weeda’s goals will stick close to Brant’s philosophy of the studio, primarily to focus on the love of dance and not on competition. “That is the biggest difference between us and other big studios in the area. The others are very good at what they do, but their main focus is on competition, that brings in a different air. It still creates the discipline, but it’s not all inclusive.

“By keeping competition at the minimum, we create a constructive, creative environment for everyone from kids to adults, it’s a creative outlet that helps us grow as people. That’s really the philosophy, we love dance and we want to use it to grow as people. We only compete with ourselves.”

Weeda wants to grow the number of classes offered including some new styles and variations for entry-level students and adults like partner dancing, tango, west coast swing and a few different Latin styles.

Brant may be transitioning away from the day to day operation of the studio, but what she has created will leave a lasting impact on the community of dancers, and Weeda is poised to take Terpsichorean into the future with his passion and dedication.