Opening May 10, this production is an intense show… a verbal chess match and the outcome can mean life or death according to producer Sandy Klein. 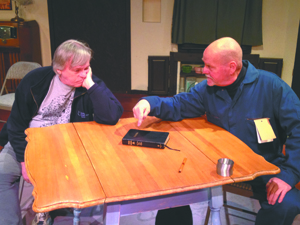 On a subway platform in New York City, an ex-con from the South (Preacher) saves the life of an intellectual atheist (Professor) who wasn’t looking for salvation. Now, the reformed murderer-turned-savior is determined to offer salvation of another kind, bringing the failed suicide victim back to his Harlem apartment. Preacher begins in control, but it quickly becomes clear that the nonbeliever is much more secure in his convictions than the believer. In a battle of wits, free will, life, death, God and the Devil, it’s one room, two men and a play that will leave you breathless!

“It’s an intense show… a verbal chess match and the outcome can mean life or death,” says producer Sandy Klein.

“Directing Sunset Limited has been a dream of mine for years it’s an powerful headlong jump onto the tracks of ultimate possibility,” says Donoho.