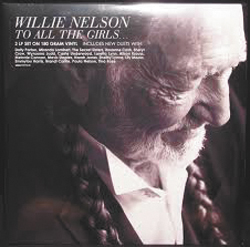 Over six decades the iconic Texas singer-songwriter Willie Nelson has earned a noteworthy position in pop music’s pantheon with treasured songs that combine the classiness of Tin Pan Alley with the rough-and-tumble grit and emotional honesty of country music.

To All the Girls reunites his two greatest loves: beautiful music and talented women of country, pop and soul. Decades of soul rendering performances and compositions in popular music have long solidified Willie’s reputation as one of country’s greatest romantics. He will always be honored as a songwriter of exceptional and precise elegance crafting songs made famous by Patsy Cline (Crazy), Faron Young (Hello Walls), Billy Walker (Funny How Time Slips Away), Ray Price (Night Life) and Waylon Jennings with Willie (Mammas Don’t Let Your Babies Grow Up to Be Cowboys).

Among the showpieces is an emotional duet with Dolly Parton, From Here To the Moon and Back, a song Parton wrote for the 2012 motion picture Joyful Noise.

Willie also performs the Bill Withers’ classic Grandma’s Hands with Mavis Staples, duets with Sheryl Crow on the Great American Songbook selection Far Away Places and offers an interesting side of his self penned classic Always on My Mind with Carrie Underwood.
Since you’ll want more, Willie has invited several other symbolic women singers to partake in his romantic interpretations including Emmylou Harris, Alison Krauss, Miranda Lambert, Norah Jones, Loretta Lynn and Roseanne Cash.

2013 is proving a banner year for the pop country patriarch whose rollicking memoir, Roll Me Up and Smoke Me When I Die – Musings from the Road, published by HarperCollins in May 2012, is a New York Times bestselling non-fiction title.
There’s nothing not to like on this album which ranges from classic foot stomping buoyant country to jazz ballad and everything in between.