Sure, people still head for California to become a star, but the fact is Portland, Oregon has an impressive, thriving music scene all its own. Oregon is a surprisingly diverse state and so is its music.

The state is home to a mix of multiple music acts spanning the genres of blues, country, electronic, hip hop, jazz, pop, rock, or even some undefinable band famous for using cool bass guitar effects. Here then, are but 10 of the best music acts from Oregon who have gone on to find success in the competitive music industry:

1. Elliott Smith
Elliot Smith was a Portland. Oregon-based singer, songwriter, and multi-instrumentalist. He co-founded his first band, Heatmiser, in 1991. He is most famous for his song “Miss Misery” which was included on the soundtrack for the 1997 film “Good Will Hunting.”

The track garnered him an Oscar nomination for Best Original Song in 1998. His popularity grew in Portland, and you can hear references to it in such songs as “Rose Parade” and “Punch and Judy.” He died in 2003. He was 34.

2. Everclear
The American alternative rock band Everclear was formed in Portland in 1991. The group was founded by vocalist, guitarist, and main songwriter, Art Alexakis. While the band roster has changed over the years, at the height of the band’s popularity, the group included Alexakis, drummer Greg Eklund, and bassist Craig Montoya.

Their first three Capitol Records releases — “Sparkle and Fade,’ “So Much for the Afterglow,” and “Songs from an American Movie Vol. One: Learning How to Smile” — all certified platinum in sales.

3. The Decemberists
The Portland-born, American indie rock band The Decemberists contracted with Capitol Records in 2005. The band is most famous for its successful sixth album “The King is Dead” which hit stores in 2011. 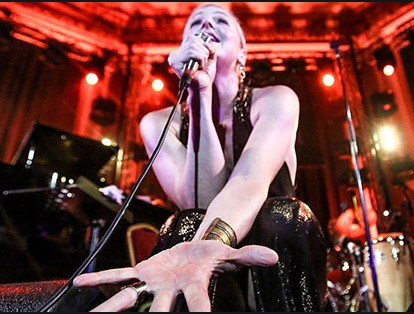 The song “Down by the Water” was nominated for a Grammy for Best Rock Song in 2012. Popular for their unusual live shows, the group funded their debut disc, the “5 Songs” EP with their gig fee from a performance at the local venue McMenamins.

4. The Dandy Warhols
The Dandy Warhols is an alternative rock band founded in Portland in 1994. They were thrust into the spotlight upon the 1997 release of their first major-label CD debut, “The Dandy Warhols Come Down.” Their fame grew in 2001 when their tune “Bohemian Like You” was used in a Vodafone commercial.

Early in the group’s history, they became popular for their nudity-filled, live gigs. In 2014 frontman Courtney Taylor-Taylor opened a bar in Slabtown named “The Old Portland”.

5. Pink Martini
The genre-crossing band Pink Martini was launched by pianist Thomas Lauderdale in Portland in 1994. Band members often refer to the group as a “little orchestra.” They play a variety of music including classical, easy listening, jazz Latin, and pop. The act features co-lead singers, Storm Large, and China Forbes. The band’s premiere platter, “Sympathique,” dropped in 1997. Their most recent release, “Non Ouais! – The French Songs of Pink Martin” hit stores in 2018.

6. The Kingsmen
The garage rock band known as The Kingsmen were born in Portland in 1959. They are most famous for their now-classic 1963 cover of American singer-songwriter Richard Berry’s song “Louie Louie” which camped out at number two on the famous Billboard charts for a total of six weeks. From 1963 to 1968 the band had 11 charted singles. Their debut disc, “The Kingsmen In Person,” spent 131 weeks on the popular Billboard Top LPs chart.

7. M. Ward
US singer-songwriter and guitarist M, Ward, a.k.a. Matthew Stephen Ward, was born in Portland on October 4, 1973. His signature sound as a solo artist is a musical mixture of multiple music genres including Americana, blues, and folk.

He is known for his analog recordings. Since 1999 he has put out 11 solo albums and a pair of EPs. His most recent full-length solo disc dropped earlier this year and is titled “Migration Stories.”

8. Cherry Poppin’ Daddies
The US swing and ska band known as the Cherry Poppin’ Daddies was established in Eugene in 1989. The act was co-founded by bassist Dan Schmid and singer-songwriter Steve Perry. While the band roster has gone through changes, founding members Schmid, Perry, and trumpeter Dana Heitman remain today.

The band’s signature sound is rooted in ska and swing but has also included such other genres as funk rock, jazz, rockabilly, R & B, soul, and world music.

9. Chromatics
American electronic music act Chromatics was launched in 2001 as a punk and lo-fi band. The band is a quartet of Portland natives–Adam Miller (guitar and vocoder), Ruth Radelet (vocals, guitar, and synthesizer), Nat Walker (drums and synthesizer), and Johnny Jewel (producer and multi-instrumentalist).

Their signature sound became Italo disco in 2007. Both their 2007 CD “Night Drive” and their 2012 disc, “Kill For Love”, received critical acclaim. The band’s work has been included in TV series and film soundtracks.

10. Esperanza Spalding
Esperanza Spalding is a singer, composer, and bassist who was raised in Northeast Portland. At the age of five, she was performing with the well-known Chamber Music Society of Oregon and was later mentored by Portland jazz trumpeter Thara Memory.

She has won four Grammy Awards and was the first jazz musician to score one for Best New Artist. She has also played for former President Barack Obama at the prestigious 2009 Nobel Peace Prize Concert.