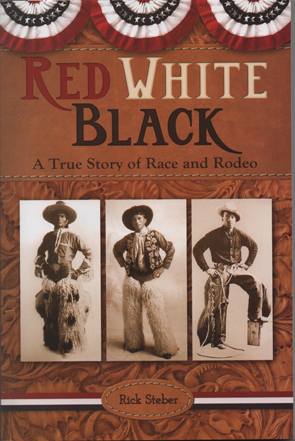 What happened that September day, the judges’ decision and the reaction of the crowd in the aftermath, forever changed the sport of rodeo, and the way the emerging West was to look at itself.

Jackson Sundown was on the Nez Perce retreat, but rather than surrender at Bear Paw with his uncle, Chief Joseph, he escaped to Canada and lived with Sitting Bull. He returned to the United States as a fugitive, and eventually, at age 53, Sundown whipped the cowboy at his own game and became the first man of color to win the All-Around title at the Pendleton Round-Up.

John Spain was from white pioneering stock. When Buffalo Bill brought his Wild West show to Oregon in 1902, John and his brother were inspired to form a show of their own. They traveled the Northwest with a string of bucking horses and put on riding exhibitions. After a roping accident cost John his right hand, he had to learn to ride with his off-hand and made a comeback at the Pendleton Round-Up.

At the outbreak of World War One, the cowboys of Eastern Oregon formed their own cavalry unit, Troop D. George Fletcher, an African American, tried to join, but Jim Crow, the strict segregation of the races, was the law of the land and George was not allowed to join his peers. He was drafted into the segregated Army, served in France, was wounded and never again was able to compete in the sport of Rodeo.

Rick Steber, who spent nearly four decades researching this story, has more than 30 titles under his belt and sales of over a million books. Rick is the only Oregon author to have won the prestigious Western Writers of America Spur Award – Best Western Novel. He is a keen observer of the challenging American West and he articulates these changes in prose that are boldly descriptive, invigorating and creative. His writing has been compared to Hemingway, Fitzgerald, Steinbeck, McMurtry and Stegner.