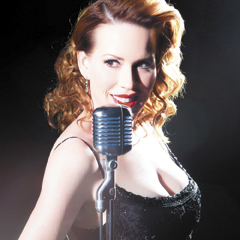 Jazz songs and Hollywood stories at the Tower April 13 debuting her CD Except…Sometimes.

One of the most iconic teenage movie stars brings her lifelong love of American standards and jazz classics to Bend’s Tower Theatre in an intimate and revealing night of stories and song on Saturday, April 13 at 7:30pm. An entire generation grew up with Molly Ringwald through John Hughes’ landmark films Sixteen Candles, The Breakfast Club and Pretty in Pink.

They saw her star in Broadway revivals of Cabaret and Sweet Charity. In the past few years, Ringwald penned two bestsellers. The first, Getting the Pretty Back, celebrates turning 40 and, she says, “being the sexiest, funniest, smartest, best-dressed, and most confident woman you can be.” The second is a novel, When It Happens to You. She currently appears in and sings the theme to ABC Family’s breakout hit, The Secret Life of the American Teenager.

Her debut CD, Except…Sometimes, was recently released by Concord Records. An homage to the Great American Songbook, the carefully chosen selection of nine standards is capped off by Ringwald’s take on The Breakfast Club’s, Don’t You (Forget About Me).

Described by the Huffington Post as a “silk-voiced jazz chanteuse,” Ringwald grew up in a home filled with music. “My dad was a jazz pianist. Around age three I started singing with his band and jazz music continued to be one of my three passions, along with acting and writing. Jazz is my musical equivalent of comfort food. It’s always where I go when I want to feel grounded.” Accompanying Ringwald at the Tower will be Peter Smith Quartet.