People only look at me as a Beatle, but my friends look at me as a whole person. That’s how life works, but it’s not bugging me anymore. Being in The Beatles was a short, incredible period of my life. I had 22 years leading up to it and it was all over eight years later.
~ Ringo Starr 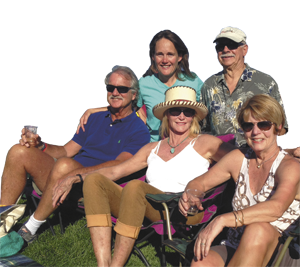 Ringo Star in Bend, Oregon. The famous Beatle drummer (singer/songwriter/actor) performed last month at the Les Schwab Amphitheater, his only performance in Oregon. How did we get so lucky? Bill Smith informs me that it was Marney Smith (manager of the Amphitheater) and Monqui Productions that lured him here with an Oregon only play.

But how did he get so lucky? Ringo performed during a spectacular summer evening on the banks of the Deschutes River to a packed, exuberant audience with the majestic Cascades and Old Mill smokestacks framing the landscape. I have a feeling he was impressed with our little town!

You can argue about who the favorite Beatle should be, but Ringo was very influential in creating Beatlemania during the ‘60s until the band broke up in 1970. During live performances, the Beatles created the Starr Time routine that was popular among his fans: Lennon would place a microphone in front of Starr’s kit in preparation for his spotlight moment and audiences would erupt in screams.

Ringo sang lead vocals with the Beatles on only a few songs, but songs many remember the words to including With a Little Help from My Friends, Yellow Submarine and Act Naturally. He also wrote the Beatles’ songs Don’t Pass Me By and Octopus’s Garden.

I might not have taken such notice of him leading to enthusiastic anticipation of this concert had it not been for the February 9, 2014 performance on CBS celebrating 50 years to the date that the Beatles performed on the Ed Sullivan show. During the celebration Ringo rocked the house with his spirited energy (he’s a young 74 for sure), charm, showmanship…and his All-Starr Band members.

Since 1989, Starr has toured with twelve variations of his band, where “everybody on stage is a star in their own right.”

Ringo is a living legend whose contribution to rock and roll is immeasurable, not only as a Beatle, but also through his prolific and thriving solo career. In gathering a new group of iconic rockers to perform in the All-Starr band each year, every arrangement offers an original and memorable moment where we get to experience songs we all know and love.

There were few people in the audience at the Les Schwab concert under 30, but babyboomers do know their music and loved the British Invasion. It was particularly nice to have a little slice of it here in Bend.