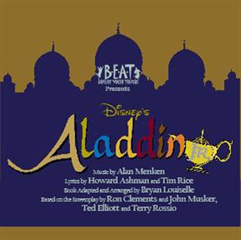 In keeping with the New Year and commitments to a whole new world, BEAT (home of Quality Youth Theatre) invites you to Agrabah, City of Enchantment and the fantastic tale of the street rat who became a prince January 23-February 1. All of your favorite characters – Aladdin, Jasmine, Iago, Jafar, the Genie, and more are here in Disney’s Aladdin, a musical adventure filled with magic, mayhem and flying carpet rides.

January is a great time of year to make commitments, loose unhealthy patterns or to “re-do.” Commonly a resolution is made in which a person makes a promise to do an act of self-improvement or something slightly nice, such as opening doors for people.  It has more history than our personal experiences trying to get children to set goals. The ancient Babylonians made promises to their gods at the start of each year that they would return borrowed objects and pay their debts. In the Medieval era, the knights took the “peacock vow” at the end of the Christmas season each year to re-affirm their commitment to chivalry.

Aladdin is directed by Jimena Shepherd with musical direction by Jonathan Shepherd, two very talented and accomplished musicians residing in Bend.  Jimena was an actor in Aladdin (the Narrator) in 2005. Jimena admitted “It is a fun and exciting experience to return to Agrabah, as the director.” Included in this adventure are several aerial performers that Kendall Knowles, director of Central Oregon Aerial Arts, will add to the celebration of Aladdin’s hoax to be a prince.

Aladdin is family friendly and a great way to experience the enchantment of a whole new world!  To quote a familiar song sung by Aladdin “Take you wonder by wonder; over, sideways and under; on a magic carpet ride.”