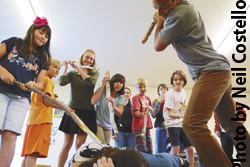 BEAT (Quality Youth Theatre) has provided delightful presentations of Alice in Wonderland and The Little Mermaid in its 2014 season. Now BEAT takes a dramatic turn for a more serious play: William Golding’s Lord of the Flies, adapted for the stage by Nigel Williams and directed by Mary Kilpatrick and Howard Schor opening July 17.

Nobel Prize winner William Golding said of his most famous book, “I was talking with my wife and I asked her, ‘Wouldn’t it be a good idea to write a story about some boys on an island showing how they would really behave?’ She thought it was a first class idea.”

BEAT as usual breaks the mold, in a way, as in the cast of 25 there are 12 young ladies who will pull up their hair and play male characters.

Set in late 1950s at the height of the Cold War and at the dawn of  World War III, a plane crashes on an uncharted island, stranding a group of schoolboys. At first, with no adult supervision, their freedom is something to celebrate. Far from civilization they can do anything they want. Anything! But as order collapses, as strange howls echo in the night, as terror begins to reign, the hope of adventure seems as far removed as the hope of being rescued.
Lord of the Flies was first published in 1954 and remains as provoking today–igniting fervent debate with its startling, brutal portrait of human nature. The actors playing the diverse characters have worked hard to understand and then portray the personalities that Golding has chosen to tell his story.