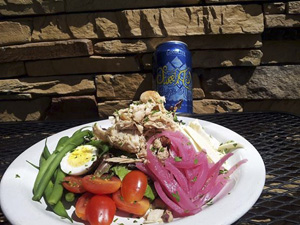 Broken Top Bottle Shop & Ale Café is not a brew pub, they’re a brew HUB! The shop opened its doors in February 2012 and has been working at putting itself on the map for tasty and healthy food, delicious beer, live entertainment and contributing to community.

Drawing initial inspiration from the Bier Stein in Eugene, Oregon, a pair of couples, owners Diana Fischetti, Andy Polanchek and Jennifer and Jason Powell set out to fill an unfilled niche in Central Oregon.  Even in the face of a booming craft beer industry in the area, they felt that no retail or restaurant location was doing what they wanted to do. They wanted to offer a unique combination of tasty food, a variety of draught craft and specialty beer, and a grand selection of bottled and canned beer for on- and off-site consumption.

They have no fryer and smoke all of their meat on-site, providing healthier options for visitors. Chef Bethlyn Rider deserves much credit for her amazing culinary creations.

BEER! Broken Top Bottle Shop offers a rotating 12 – 15 tap selection of craft and specialty beer, along with wine and other beverages. They also offer chilled single bottle and canned beer to purchase from the 12-door cooler to drink on site or take to-go. They currently have about 300 varieties of beer, cider and other beverages and plan to double their selection in the next six months. And, they fill growlers, too!

BTBS held multiple events involving beer and entertainment throughout the year, including the Central Oregon Beer Week (a week of beer tastings and bands) in May, the Brewtal Breakdown Festival in September, the Westside Wassail song & cider fest in December and their Happy Firkin Anniversary three-day celebration in February. (By the way, a firkin keg is unpasteurized, unfiltered, and carbonated through cask conditioning rather than CO2 injection.)