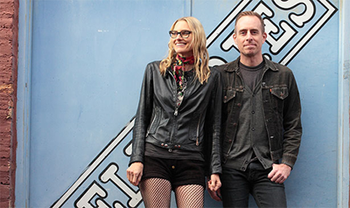 The Butch’s Place Peak Summer Nights series at the Athletic Club of Bend boasts several highly touted artists/musicians including Aimee Mann and Ted Leo (The Both) on August 28.

Is The Both—the name given to the new collaboration between Aimee Mann and Ted Leo—a duo or a band? This seems like a critical philosophical question, and the answer is: Can’t it be both? Although these once-and-future solo artists are the only mainstays of the project and do more than their share of harmonizing, there is an overwhelming sense that the rock is strong with these two, which makes it difficult to relegate their galvanizing joint music to a terminology historically reserved for gentler guy/girl verse swappers.

The Both represents the pairing of two great if underappreciated talents who go great together. When the two artists toured together in 2012, Leo’s solo sets inspired Mann, the headliner, to hop onstage with him. From there, the 11 original songs on The Both were written with a back-and-forth process and recorded in L.A. throughout 2013 with producer Paul Bryan, who doubles as a member of Mann’s band.

Leo’s roots are in the punk and indie movements, having fronted Ted Leo and the Pharmacists for 15 years. His most recent set, The Brutalist Bricks, was released on Matador in 2010. Mann’s eighth album, Charmer, was released in September 2012. In support of their new disc, The Both are touring the U.S. this summer, and are playing in Bend for the first time.

Each show will feature a special guest performance to open the show.

Opener will begin at 6:30pm and the headliner will follow at 7:30pm.