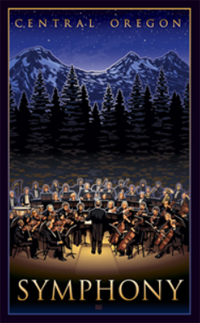 irected by Michael Gesme, the Symphony will open its 2013-14 season with concerts at 7:30pm on October 19 and October 21 and 2pm on October 20 in the Bend High School Auditorium.

Doors will open 45 minutes before the performances. Tickets are required for these free concerts.

Highlighting this concert are the winners of the 2013 Young Artists Competition, Una Wagner and John Fawcett, along with a performance of the first true symphonic masterwork of Antonin Dvorak, his Symphony No. 5.

The concert will open with Gesme leading the COS musicians through the dramatic and raucous Overture to Morning, Noon and Night in Vienna by Franz von Suppe. Next, Soprano Una Wagner, winner in the senior division of the Young Artist Competition, will present two operatic gems.

The first, drawn from Handel’s opera Xerxes is an aria titled Ombra mai fu, which extols the beauty and virtue of a tree and the shade that it provides. Handel’s original intent was one of humor, but the sheer beauty of the music led this being considered one of his most gorgeous and well-known melodies, according to Germe. The second is a melodically charming, though thoroughly controversial, aria drawn from Don Giovanni by Mozart titled Batti, batti.
Violinist John Fawcet will conclude the first half with a performance of the first movement of Symphonie Espagnole by Lalo. As the title suggests, the work is filled with Lalo’s impressions of Spanish dance and rhythm, the first movement being a stylized version of a habanera.

After intermission, the COS will perform Symphony No. 5 by Dvorak. Many of Dvorak’s earlier symphonic works have been overshadowed by the popularity of his last two symphonies, especially No. 9, known by its nickname From the New World. According to Gesme, there has been an exploration and reassessment of his other symphonies, and No. 5 gained attention as a worthy companion to the latter works and has received accolades for its creativity, beauty and sheer orchestral power. Dvorak biographer John Clapham boldly proclaims: “It is as if a new world is revealed in the [Symphony No.5]. Dvorak’s new-found mastery is first noticed in the magical opening . . . and subsequently seen in the remainder of the work. But nowhere is it more apparent than in the powerful finale.”

All Central Oregon Symphony donors receive their tickets in the mail prior to the concerts. A limited number of complimentary tickets are available online, on a first come-first served basis. (Please note that tickets will no longer be available at business outlets.)

To reserve complimentary tickets, please visit www.cosymphony.com to register for e-tickets. The tickets will be emailed to patrons to print and bring to the concert. Alternatively, you can contact the COSA office at 541-317-3941. COSA donors can enter the auditorium 45 minutes prior to the downbeat to choose their preferred seats. Those with complimentary tickets are admitted 20 minutes prior to the concert.

The Central Oregon Symphony is an all-volunteer ensemble whose talented members dedicate a significant amount of time rehearsing and performing with the symphony. Affiliated with Central Oregon Community College and supported almost exclusively by individual donations from local community members, the ensemble is committed to making free symphonic concerts available to all members of the community. Thanks to the contributions of season ticket holders, no one is turned away at the door.

For information regarding season tickets, scheduling, becoming a donor and volunteering for the 2013-14 concert season, call 541-317-3941 or visit www.cosymphony.com.