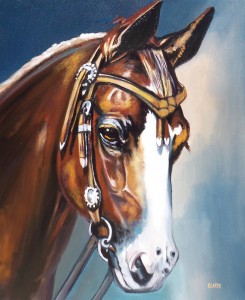 As long as the Art of the West and High Desert Rendezvous have existed, cover artist Barbara Slater has contributed her paintings. She reflects upon one of her first visits to The High Desert Museum (HDM) and remembers how she fell in love with the animals there. “There is something about the way the animals are handled at the museum. How they are cared for has always drawn me in,” says Slater.

Her involvement with the Museum runs deep;from visiting the one legged owl named Clicker and learning about birds of prey to face painting at the annual Halloween event. It is clear that there has been a long-standing connection between the talented artist and the Museum.

It was this fascination that originally led Slater to donate her work when the Art of the West exhibit first began. She explains that she doesn’t just take pieces from her collection to give to the event, but instead, she paints pieces that are specifically for the exhibit. 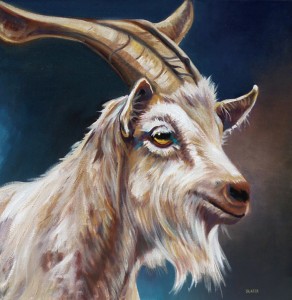 Still fascinated by the creatures around her, Slater’s paintings for Art of the West illustrate animals that people are drawn to including dogs, horses, sheep, chickens and, of course, cows. She uses portrait style, rather than pastoral scenes, to convey expressive emotions radiating from the animal subjects of her work. 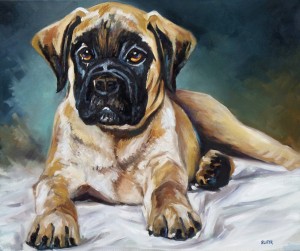 When speaking about this year’s painting, Range Manager, Slater mentions that she has a companion piece featuring the same color scheme and white park cow. “They have such a symbolic appearance and watching them just graze gives me a peaceful feeling,” she explains.

Anyone who is familiar with Barbara’s work knows the exceptional beauty she is able to portray through the animals she depicts.

Slater was particularly excited for the opening of the Art of the West Exhibit, which took place on July 30. The event featured music, food, and some of the artists, giving them an opportunity to speak to the public about their work. The exhibit continues until the night of the High Desert Rendezvous which takes place August 29.