Celebrate this Thursday, June 27, behind the Bend pub to party like it was 1988. 80’s attire and moustaches encouraged. Retro pricing on food and beer. Music by The River Pigs and Boxcar Stringband. Special delivery of the first keg of BBXXV by brewmasters via some extra creative modes of transpo. CHEERS TO 25 (plus) MORE YEARS! 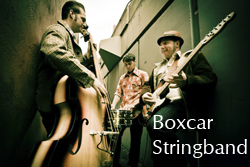 Celebrating its 25th anniversary this year, Deschutes Brewery began as a brew pub in downtown Bend and is known for such brands as Black Butte Porter, its flagship brew and the nation’s number one selling craft porter and the popular Mirror Pond Pale Ale. In addition to its original Bend pub, this family and employee-owned brewery opened a second pub in Portland’s Pearl District in 2008. The company’s main brewing facility is located on the banks of the Deschutes River and produces more than 250,000 barrels of beer annually for distribution in 21 states and two provinces.

Deschutes Brewery founder and CEO, Gary Fish, was recently awarded the Ernst & Young Entrepreneur of the Year award. As a regional award winner in the Pacific Northwest, Fish will go on to the national Ernst & Young annual awards gala in Palm Springs, California, on November 16, 2013. The award recognizes outstanding high-growth entrepreneurs who demonstrate excellence and extraordinary success in such areas as innovation, financial performance and personal commitment to their businesses and communities.

Fish was selected for the award based on the successful growth of Deschutes Brewery, which is ranked as the fifth largest craft brewery in the nation. Fish’s long-term commitment to innovation and experimentation in the brewing field has helped to shape his own company and the industry as a whole. He was also selected based on his ongoing work in giving back to the community; the brewery dedicates $1 per barrel sold to charities to help fulfill the goal of building a healthier society.