Contemporary & Nostalgic Western Store in the Old Mill District will present a special fashion show on April 25 with part of proceeds going to BendFilm and honoring Independent Women for Independent Film.

When BendFilm Director Orit Schwartz told Andrews that she didn’t have sponsors for several of the awards that go for $1,000 a piece, Andrews said: “I think I can get ten of my women friends to each pitch in $100 and sponsor the director award.”

In order to make it a little special she came up with the idea to casually form a group of women called Independent WOMEN for Independent Film (now referred to as Indie WOMAN).

Andrews reports that in about 15 minutes she had 22 women signed on. She encouraged them to forward the request to other women promising to sponsor more awards and design some cool buttons just for supporters of the effort. 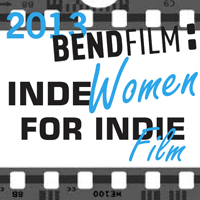 The concept has wildfired all over Central Oregon and beyond. Today the group is around 100 women and growing every day.

Rebecca Charlton, owner of Cowgirl Cash in Bend, drew on her network of customers and friends to add to the list saying: “This goes to show what an incredible group of women we have right here, willing to preserve such an excellent festival.”

Andrew encourages other to get onboard for only $100, “It’s really important right now to preserve, enhance and protect such an excellent festival and what it brings to Bend. With such limited resources BendFilm really needs our help now and this is one small way we can join forces and assist.”

Desperado features Bend artist Barbara Slater who is inspired by the “out west” way of life and cowboy culture with a touch of city glitz. Painting oils with energy and spirit, this artist’s pigmentation is rich and succulent, while her brushwork is bold and responsive. Barbara continues her studies with different genres, painting still-lifes, florals, landscapes and animals. Animals are her present focus with images of vibrant roosters, horses, cows and other barnyard residents. Painting these rural inhabitants with love and respect, Barbara gives each animal an attitude and personality. Slater is a member of Oil Painters of America, California Art Club, American Women Artists (AWA) and The High Desert Art League. Slater’s paintings are an ongoing exhibit at Desperado at the Old Mill. www.barbaraslater.com.
April 25, 5-8pm special fashion show to support BendFilm’s Independent Women for Indie Film.