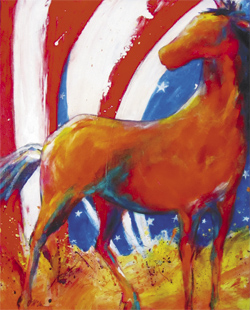 Artist Dee McBrien-Lee has been on a journey. Since early childhood, she has had the benefits of an artistic mother and a lifetime filled with inspiration. Growing up on Long Island, McBrien-Lee was exposed to cultural diversity and had many opportunities to explore the artistic community of New York. She was influenced and inspired deeply by her high school teacher, Doris Rowe who had the energy and passion of 10 instructors. After minoring in Fine Art at SUNY New Paltz, McBrien-Lee headed west and has remained in the western U.S. for the balance of her life.

McBrien-Lee experimented with jewelry making, printmaking and a variety of other arts while in college. She always returned to painting and as an adult, acrylic became her preferred medium. After a childhood around horses and as a self-professed “cowgirl wannabe,” McBrien-Lee spent many years painting western themes focusing on equine art and landscapes. Influences for her art came in many forms, particularly the post impressionists and the western art of today. Using acrylics, she captures the relationship between the horse and their humans with amazing clarity using strong colors and bold brush strokes. Her colorful horse paintings can be found in private collections throughout the U.S. including New York, Utah, Colorado and Oregon.

“I knew something had to give when I wasn’t dancing.”

A true believer in the philosophy of Dance like no one is watching!, McBrien-Lee felt a change coming in 2013. Dee found herself searching for inspiration rather than seeing it everywhere she looked. The natural ease with which she was drawn to her subject was shifting. “Music has always filled my studio and when I am particularly excited about a piece, I find myself dancing around like an idiot. I am not certain of the exact moment I forgot to turn on the music, but once I recognized that it was missing, I knew a change was inevitable.”

Summer 2013, McBrien-Lee signed up for a workshop with Robert Burridge to paint in the abstract. She felt that to get herself moving forward again, she would have to completely abandon what was comfortable and jump headfirst down the rabbit hole.
“It was the BEST thing I have ever done for myself!” The class allowed her to continue to paint in acrylic, her preferred medium, and took her to places she may not have reached without the “permission” this experience had given her. “I am so fortunate to have taken this workshop. I always knew that I wanted to move toward looser, more abstract painting, but did not know how to get there or where to begin. Burridge was everything that I needed to get me going forward on my latest adventure.”

To jumpstart her leap forward, McBrien-Lee felt it necessary to come up with a plan. She ultimately chose Alice in Wonderland and Through the Looking Glass for her inspiration. “I felt that I needed a clear direction to move me into more abstract works. Something I could rattle around with in my head.” After reading both books again earlier this year, she was ready to create. The results are a series of works that are energetic, colorful and masterfully done. Incorporating collage has added a new dimension to several of the pieces.

From The Beginning where we find Alice contemplating the rabbit hole all the way to Coronation, the story’s conclusion, the works tell the tale of Alice’s adventures in a new and exciting way. From pure whimsy to completely abstract works, this series will delight every viewer.

In addition to the Alice group of 13 works, McBrien-Lee has created some stand alone pieces that are very exciting. Freedom takes her new found direction and her former passion for equine art and combines the two in a beautifully rendered piece, representative of her independence from the self imposed box she was working within. The Mother Earth works bring symbolism and new meaning into several of her latest works. Today, McBrien-Lee is finding new inspiration through stories, dreams and quite simply, her unleashed imagination.