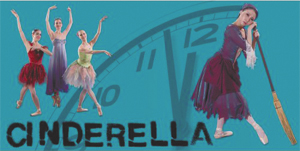 The Eugene Ballet Company begins its 35th performance season with ballet’s epic story of Cinderella. A selection of dancers from the Central Oregon School of Ballet have also been asked to take the stage at the Bend performance on November 8 at 7:30pm.
In Cinderella Toni Pimble’s original choreography and Prokofiev’s beautiful score bring this fairy tale to life. With something for everyone—romance, comedy, fantasy and new shoes—Cinderella remains one of the great ballets of all time.

Twenty six students from Central Oregon School of Ballet have been invited to take the stage in the role of sprites and gnomes for this one-time performance at Bend High Auditorium. Central Oregon School of Ballet directors, Zygmunt and Sarah Sawiel, are honored that Eugene Ballet Company continues to invite their students to take part of their Bend shows year after year.

It’s a busy season for the students of Central Oregon School of Ballet as they are learning parts for Cinderella as well as gearing up for their annual holiday production of the Nutcracker Ballet.

At Bend High Auditorium, Nutcracker will take place on December 6 at 3pm and 7pm and December 7 at 3pm. This is a traditional and classic take on the Nutcraker Ballet where Tchaikovsky’s timeless melodies come to life with elaborate stage sets, beautiful costumes and skillful performances.

Since its opening in 1981, Central Oregon School of Ballet has become known for its city-wide performances and traditional ballet instruction to young people. Advanced students from the school have continued their studies with national ballet schools such as the Joffrey Ballet School in New York; the North Carolina School of the Arts in Winston-Salem, North Carolina; the Universal Ballet Academy in Washington, D.C.;the Boston Ballet School in Massachusetts, and the Nutmeg Ballet in Lexington, Connecticut.