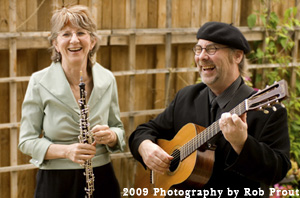 Grammy Award Winners, Nancy Rumbel and Eric Tingstad, will be performing at the FivePine Conference Center on Friday, November 21 at 7pm.

Nancy Rumbel plays the oboe, French horn and ocarina. Eric Tingstad plays the classical guitar. Their 2003 album, Acoustic Garden, won a Grammy Award. Their style of music is in the New Age tradition of George Winston who praised their music as “moving and evocative, both of feelings and nature.”

Eric and Nancy began their collaboration in 1985. Their debut album, The Gift, quickly became a holiday classic. In the past 24 years, they have produced 19 albums. In 1998 their album, American Acoustic, was honored as Acoustic Instrumental album of the year. They performed in Carnegie Hall in 2000. The last time they performed in Central Oregon at the Tower Theatre, their performance sold out.

Nancy grew up in San Antonio and continued her musical education at Northwestern University where she was introduced to new influences, styles which led to her joining the Paul Winter Consort.

Eric grew up in Seattle and attended Western Washington University where he was trained in the Segovian classic guitar tradition. He is a product of influences like Led Zeppelin, Hawaiian slack key guitar, Ravi Shankar and Martin Denny. His solo album, Southwest, was nominated for another Grammy.

The concert is a fund raising event for Sisters Trails Alliance. Tickets are available on line at www.sisterstrails.com. Cost of a ticket is $40 online and $45 at the door.