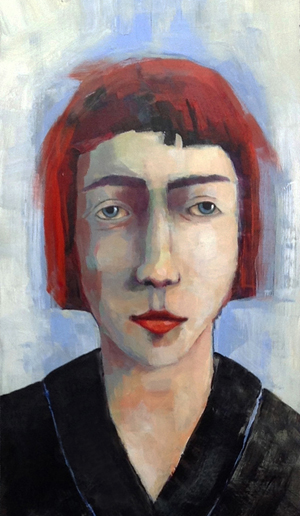 Reinvention has become a part of local painter Mary Medrano’s process. Career changes, moves across the country and loss have all contributed to the deep well of emotion that finds its way onto the canvas as she paints. Her work has a way of reflecting that internal state, and her new series of paintings based on Oregon birds hints at the joy and peace she has found in her current home of Bend, Oregon, where she has become a major component of the Bend,Oregon art culture.

“My subject matter has mainly shifted between birds and people,” Medrano explained. “When I first started painting it was crows, then when my mom died there was a shift into painting people and faces. Everything I paint is autobiographical to some extent. It is my life and my stories that make their way into my paintings.” She went on to explain that in the years it took her to adjust to her mother’s passing, painting figures represented a way of dealing with her grief.

Medrano’s connection with art is deeply rooted in a childhood spent learning crafts from her mother during long winters in Michigan. “I am grateful my mom spent so much time teaching me what she knew. That’s when it all started,” she said.

Most of her school years involved a foray into music: the violin, flute and oboe satisfied that creative urge, and once in college, it morphed into photography. After receiving a BA degree in photography from Western Michigan University, she moved back to the Detroit area and worked at an ad agency as a photographer’s assistant and ran the darkroom.

Medrano hit the road and ended up in the San Francisco Bay Area where she began working in the high-tech industry before returning to school to get a degree in graphic design. 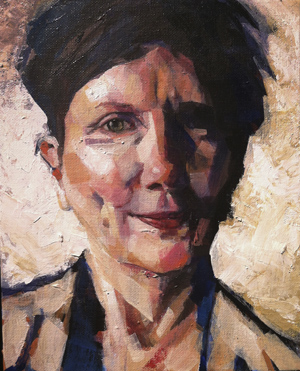 While working at an ad agency in San Jose in 2001, the dot com bust happened, forcing Medrano to reinvent herself once again. “I took an online course in painting on fabric. I really enjoyed it, and took a second course. That was the beginning of my painting career,” she explained.

Medrano gave herself her first art show by hanging her paintings on the fence in her backyard. Since then she has exhibited in John Natsoulas Gallery in Davis, California; Gallery Blu in Santa Clara, California; twice at Ameriprise Financial in San José, California; and at the 2007 Florence Biennale in Florence, Italy.

Primarily self-taught, Medrano said her technique for learning to paint was to paint, a lot. “I took several workshops, but primarily just practiced,” she said. “The best advice [I can give to a new painter] is to paint. The more you practice the better you will get.”

She and her husband moved to Bend in 2012, 10 years after first visiting the area while on a road trip of the Northwest.

She now has a studio in downtown Bend overlooking Tin Pan Alley at 25 NW Minnesota, Suite 12, and is represented by Bend Your Imagination at 126 Northwest Minnesota Avenue and COSAS NW at 115 Minnesota Avenue.

Much of Medrano’s inspiration comes from the natural world, another reason that Bend has had such a positive influence on her work. “I am inspired by birds in particular,” she explained. “I enjoy watching their behavior. Some are solitary. Some flock. Some are bold. Some are calm. They span a wide range of personalities and behaviors. Focusing on a solitary bird in my art allows me to work from my heart. My joy and energy goes into the process rather than focusing on content or meaning. Any stories that emerge come about subconsciously,” she explained.

Because she started her artistic career by painting crows, the reemergence of birds in her current work “feels like a full-circle moment,” she stated. “I’m in a really good place in my life.”

When Medrano paints, her process oscillates between adding and subtracting color, and uses graphite, ink, paper, fabric, oil pastels and colored pencils during the process. “It’s a give and take process until I am satisfied with the overall result,” she said.

“The color in my work is innate,” Medrano continued. “I have studied color in depth, but there’s not a whole lot of meaning behind it in my work [except for] the red-haired women I paint. They almost always represent me.”

A recent series of canine portraits for a group show was incredibly popular and spawned a commissioned pet portrait business. Since 2011 Medrano has painted over 70 pet portraits.

Whether Medrano is painting birds, dogs or the human face, it is essential for the work to emerge on its own. “I only get in trouble when I force things,” she commented. “I have to let it evolve naturally.”

Medrano will participate in the First Friday Art Walk,an art show that showcases Bend, Oregon art, in her studio above Thump Coffee on March 6 from 5-8pm. On April 24-25 she will show her latest work at Art on the River at Eagle Crest Resort. On May 30 she will participate in Barks and Recreation in Drake Park, an event sponsored by the Bend Spay & Neuter Project.

Medrano hosts painting parties. Contact her at info@marymedrano.com for more information. If you would like a studio visit call 408-250-2732. www.marymedrano.com, Facebook.com/MaryMedranoGallery