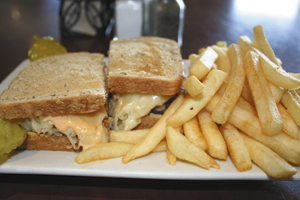 “It’s funny that we’re going to the airport today when I have to catch my flight home tomorrow,” said my friend who was visiting from San Francisco.
“Not that airport,” I replied.

The Airport Café, which replaced Café 3456 on September 11, 2012, is located at the Bend Municipal Airport. And going there is downright fun. It turns out that the flight school is just a couple of doors down. So in addition to watching helicopters take off and land, you get to witness students trying their sometimes less than steady hands at the controls.

There isn’t a bad seat in the house. But if you really want to focus on the take offs and landings, find a table on the right side of the restaurant as you’re looking out.

We hadn’t been seated long when a private plane taxied down the runaway. Instead of smoothly rising into the sky, it bounced along as if it had hit a couple of speed bumps before finally getting airborne. Thoroughly entertained, my two friends (the one from San Francisco and a local gal pal) and I ordered a round of what turned out to be superior Bloody Marys and opened our menus.

The first thing I noticed is that the Airport Café serves breakfast all day long. The choices are basic. This is not the place to go if you’re craving Eggs Benedict or a duck confit pizza. “It’s just your basic food,” says co-owner Don Peterman. But it’s good enough to convince small plane pilots to fly in for lunch … literally.

Since it was late morning, we decided to start with breakfast and then move onto lunch. I was tempted by the fajita omelet with flat iron steak strips, as well as the eggs and bacon. In the end, however, we opted for the Kitchen Scramble—a stellar choice. There’s just nothing wrong with eggs scrambled with sausage, bacon, ham, onions and mushrooms (we asked them to omit the bell pepper). The bottom layer of home fried potatoes and onions kept the eggs hot, while the country gravy, which we asked for on the side, added even more sausage and a black pepper note to the dish.

We also tried Rhonda’s Texas Toast. It’s not as thick as I would expect Texas Toast to be, looking more like, well, Oregon French Toast. I like the egg and milk mixture to soak through my French Toast so that it tastes like bread pudding. On this one, only the outside was coated. Still, the dish was tasty.

Time for lunch. Our friendly and very competent server cleared off our plates before the Café Burger and Reuben we were sharing arrived. In the name of thoroughness, we also ordered a selection of sides, so she had to make room. 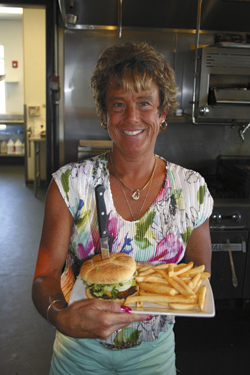 Both the burger and the Reuben were fine. We had ordered the burger rare and had neglected to specify the cheese we wanted (we could have gotten Swiss, Cheddar or Pepper Jack). It came without a trace of pink, let alone red, to be found and with a slice of American cheese. Even so, we chowed down without hesitation. We dove into the Reuben with equal gusto. Caramelizing the pastrami on the grill was a nice touch.

Even though all the meat at the Airport Café comes from the Oregon Beef Company, the stars of this show turned out to be the potatoes. Large fries—seasoned with a homemade salt blend that contains pepper, thyme, a little cayenne and served piping hot—were deemed “addictive” by my San Francisco pal. The red potato salad made with eggs, fresh herbs and a dash of pickling spice was even more delicious.

“This is no foo-foo food,” said café manager Rhonda before quickly adding that after six meals, the seventh is free. Just make sure you get a Café Club card. A final note: On Friday and Saturday, the Airport Café also serves up appetizers ($5 or less) and some of the cheapest beer and cocktails in town for happy hour. I’m just saying…