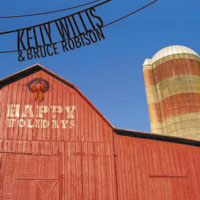 A friend and I were trying to find the best rendition of Have Yourself a Merry Little Christmas when I first encountered Kelly Willis on this CD.

Willis, critically acclaimed as a roots music singer, is recognized as a new country and Americana pioneer. She appeared in the Tim Robbins film Bob Roberts and was heard singing the Dave Alvin/John Doe song Little Honey in the hit movie Thelma and Louise.
Bruce Robison has made his mark as both a singer and songwriter of number one hits like Wrapped (George Strait), Angry All The Time (Tim McGraw and Faith Hill) and Travelin’ Soldier (Dixie Chicks).

After releasing a holiday EP together in 2003 their annual Christmas season concerts have become a Texas Yuletide tradition. Married for 15 years and the parents of four children and following their own singular successes, they are now collaborating as a duo and developing a musical quantity that is entirely new and utterly its own.

Robison’s rendition of A Winter’s Tale by R. B. Morris is simply fabulous. Kelly and Bruce share the vocals on Baby, It’s Cold Outside….perfect harmonization and very personal. You can just see the two of them discussing the options of staying or going out in the winter cold. “Kelly you’ll freeze out there.” “I really can’t stay,” she responds.

The Christmas Waltz, performed by Robison with sentimental bravado and then Please Daddy, Don’t Get Drunk, somewhat humorously shared by both Willis and Robison is delightful. “Don’t cry mama, everything’s going to be alright.”

But the very best song on the cd is Have Yourself a Merry, Little Christmas sung by Willis. This is one of the best renditions ever (and just about any well known singer has performed this lovely song written by H. Martin and R. Blane in the ‘40s). It was first introduced by Judy Garland in the 1944 MGM musical Meet Me in St. Louis. Frank Sinatra later recorded a version with modified lyrics, which has become more common than the original.