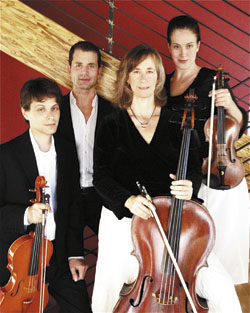 This Los Angeles based group was formed and inspired by the bustling Central Market of Guatemala City while on tour, and they are making their debut in the HDCM Series this season June 8.

The members of the group have collectively received bachelor, master and doctorate degrees from prestigious schools such as the Juilliard School of Music, USC Thorton School of Music, Peabody Conservatory and the Cleveland Institute of Music. They have been featured at numerous venues in Southern California, and have commissioned and premiered a number of works by composers.

This concert is brought to you by Umpqua Bank on Saturday, June 8, 7:30pm at the Oxford Hotel. The program includes Gabriel Fauré’s Piano Quartet in C Minor, his best known chamber work, and Joaquin Turina’s Piano Quartet in A Major, infused with Spanish folk music and Gypsy and Andalusian references.

The Spotlight Chamber Players from HDCM’s Educational Outreach program will perform works by composers ranging from Bach to Liadow prior to the concert. The following students were selected for this 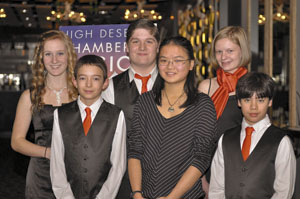