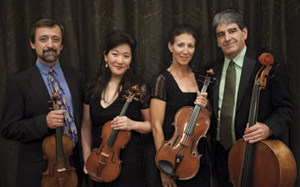 High Desert Chamber Music continues their seventh season with a special Valentine’s Day concert on Saturday, February 14, at the Tower Theatre. The Pasadena based Crown City String Quartet will perform works inspired by love and romance. Concert-goers will receive a complimentary rose and a custom treat from Goody’s Chocolates.

This evening is brought to you by Michelle Mills Real Estate and Summit Funding.

The Crown City String Quartet has been the premiere group featured in the HDCM Series and an audience favorite since their debut in the HDCM inaugural concert.  Founded in 2007, their performances have been praised as “sublime” and “simply moving and spectacular.” Based in the Crown City; Pasadena, California, the members have worked together in the Motion Picture and TV recording studios and are current and former members and principal players of some of Southern California’s most renowned music organizations.

The members of the Crown City String Quartet will participate in a pre-concert talk beginning at 7:15pm. This event is free for all ticket holders. In addition, the students selected for this year’s Spotlight Chamber Players program will be performing in the lobby prior to the concert.