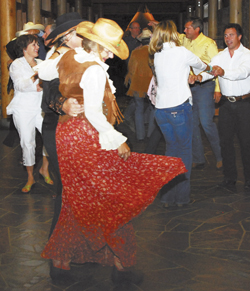 For the first time in more than a decade, High Desert Rendezvous, the High Desert Museum’s annual fundraiser and gala, will return to its heyday as the wildest of Western nights, with live rodeo events and games at Horse Butte Equestrian Center, the ranch of Museum Trustee Elizabeth McCool.

In the early days of the Rendezvous, Museum Founder Donald M. Kerr partnered with Lesley and Matt Day who hosted the event at their Hooker Creek Ranch. Enormously popular, the Rendezvous attracted supporters from all over the state to become one of Central Oregon’s most time-honored traditions. The gala has been at the Museum for the past 11 years, but recently supporters began reminiscing about the Western rodeo nights of past, prompting the Museum to bring the signature event back to the roots.

Many of the best memories were of the Team Calf Branding Calcutta competition, which returns this year and offers the chance to be a true cowboy. Teams of two, along with a trained roper, compete in roping a calf and “branding” it with chalk. The timed event and the winners are awarded signature Rendezvous belt buckles and a year’s worth of bragging rights. In the Calcutta betting procedure, each team is auctioned off to the highest bidder prior to competition. Half of the proceeds will go to support the Museum’s education programs, and the bidders on the first and second place teams receive 30 percent and 20 percent, respectively.

Art of the West Show

The High Desert Museum’s annual Art of the West Show, on display from August 3 -17 in the Brooks Gallery, offers the opportunity to view some of America’s best artists’ works, as well as a chance to make one of your own. The juried art works are also included in a silent auction, with proceeds supporting the Museum’s unique and acclaimed educational programs.

The Museum invited award-winning artists to submit works inspired by the region’s landscape for consideration in the show. The 28 selected works are creative expressions from a number of  regional artists including: Janice Druian of Terrebonne, Sheri Greves-Neilson of Dunnigan, California, Travis Humphreys of Cedar City, Utah; Linda Loeschen of Basalt, Colorado, and Sherry Salari Sander of Kalispell, Montana.

Cowboy boots surrounded by the browns and golds of sun-baked earth, bear, elk and rippling pasture grasses are all images captured in the brush strokes of artist Linda Loeschen. The Colorado painter is part of the High Desert Museum’s Art of the West show, on exhibit in the Brooks Gallery from August 3 – August 17.

Having lived in the West for over 30 years, Loeschen’s artwork is infused with everyday scenes from her life on a small ranch in Northwestern Colorado. She has been successfully navigating her way through the art world since her unexpected foray into painting after a career in interior design, dance and motherhood.

She explains the shift into painting occurred during a time when she had to break from teaching dance. The physical downtime resulted in a creative out-pouring after attending her first watercolor class. “It was wonderful and I discovered a new power than was much larger than what I had been doing.” After entering a local art show, her artwork made headlines and soon she was invited to participate in more shows and exhibit in several galleries. “Painting is a great balance between the physical and the creative,” she explains.

Although new to painting, she established an impressive set of artistic skills while attending Parsons and NYC as an undergrad. She credits Parsons for giving her the in-depth training in color, design and perspective. “To show our ideas we had to paint…we had to do color charts and were trained to carry color and design…the program really trained our eyes and our hand. I had no idea I would do the fine art stuff later in life,” Loeschen commented.

She began painting her husband’s cowboy hats, a shirt on a post, horses in the pasture, and attended western events for inspiration. “That’s how I got interested in the cowboy. I did a whole series of cowboy portraits; each hat is individual to the man or woman.

“It’s when I see the ‘old’ that gives me the spark that makes me want to get it down and play with the textures and light. It’s the old trucks left lying in the fields, the old fence lines, etc. that I am drawn to paint. However, I find that even now my work is beginning to show abstractions and less detail. Am I beginning to change as well?”

Describing how she is working towards capturing more of a contemporary feel in her paintings, she commented, “I left the negative space [in the cover artwork, Tailgate Tales]  to let the viewer fill it in…I didn’t want to always do traditional cowboy landscapes.

“It is a constant battle to go where I want to go and let myself do it…I start my work by throwing colors down and they always end up revealing themselves, every painting is different, I don’t have a formula…I want the fresh spontaneous feel.”

Loeschen’s art can be seen at the Rare Gallery in Jackson Hole Wyoming, Main Street Gallery in Carbondale and Glenwood Springs, Colorado and Philinda Gallery in Edwards, Colorado.