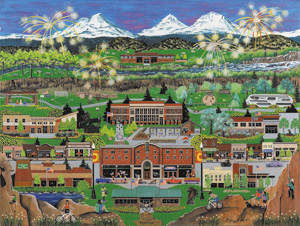 The first painting, Redmond in Winter, was unveiled at Redmond’s holiday parade and was purchased by local residents Frank and Anne Graham. The ribbon cutting for this second painting will occur right before the Fourth of July parade in downtown Redmond at the Arch at 10am. Frank and Anne Graham have already purchased the original painting to complete their Redmond series.

“We have worked so hard to build a public art program here in Redmond primarily through private fund-raising efforts such as this,” Linda Hill, chair for the Redmond Commission for Art in Public Places added. “We are very grateful to Jennifer for her generous donations and the Grahams for their tremendous support of our program. This is an opportunity for people to own a beautiful new print by Jennifer Lake showcasing all of the beautiful changes in Redmond over the past couple of years at reduced costs while supporting our public art program.”