The Redmond High School Drama department is in their second week producing and performing an amazing show. Finals nights March 1-2. 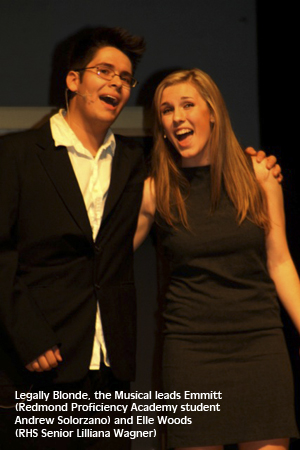 The show represents unique casting collaborations between the RHS Theatre, the RHS Leadership/Mr. RHS program, and the RHS Baseball team. Under the coaching direction of RHS Varsity Baseball Coach (and Dean of Students) Marc Horner, eight Varsity/JV players are participating in the show as dancers and principal characters. Additionally, three Mr. RHS candidates appear on stage. The additional proceeds from the “Blondes for Babies” reserved ticket option support the fundraising efforts of the Mr. RHS cast members for the benefit of St. Charles’ NICU.

This collaboration took on unanticipated significance for the cast and crew when, over the course of the production, Coach Horner’s family found themselves facing a difficult pregnancy. On opening night, Coach Horner and his wife Carolyn celebrated the arrival of baby Adrianna Mackenzie Horner (4 lbs., 14 oz.), who is currently thriving with the assistance of NICU. 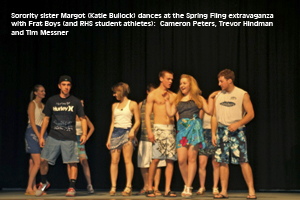 Director Hilda Beltran Wagner spoke of the collaboration eloquently, “An entire boatload of ‘snaps’ heads in Marc Horner’s direction. Coach Horner… goaded, pushed, coerced and otherwise inspired almost a dozen members of the Varsity and JV Baseball teams to audition and participate in our production. The merging of two campus subcultures — an athletic one with an artistic one — has been nothing short of mind-blowing for me as director and coach. It has been incredible to watch students shrug off their inhibitions and preconceived notions based on classic campus stereotypes and truly become one ensemble working toward one common goal.”

She continues, “What you see on stage represents, undoubtedly, not only the most talented cast and crew that has ever worked together on the RHS stage but also the most diverse. As we usher in a new era in the next year, it will be in a broader school future where no program – athletic or artistic – can be said to “trump” another. Our process has been a metaphor of who we are and what we can become: whether we are pitchers or performers, bookworms or ‘Blondes,’ we are one Panther Nation, unified and proud.”

There are two more performances of the show coming up, Friday (3/1) and Saturday (3/2).  All shows are at 7pm, except Friday evening’s performance which will follow the RHS state playoff basketball game.

FRIDAY, MARCH 1 “LATE SHOW SPECIAL,” 9pm, after the OSAA Playoff Basketball Game. Attendees showing a basketball stamp at the auditorium door receive their ticket to the play for just $5! (Because of scheduling conflict with the game, the previously scheduled 7pm performance has been changed to9 pm)