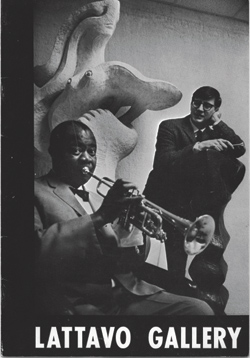 The caricature art adorning the bottles of Maragas wines was created by Doug Maragas’ mother, Joanne Lattavo, in the late ’50s and early ’60s. What you may not know is Joanne was an accomplished oil painter with a renowned art gallery throughout the ‘60s. Contemporary artists and entertainment greats such as Harry Wheeler, Mary Ann Flynn, Mel Someroski, Louis Armstrong, Buddy Hacket and several others showed their art or performed at the Gallery.

Doug has had numerous art pieces created or collected by his mother (who passed away in 2002) in storage for several years. “It’s time to share her art with the world again, and what better time to kick it off than the weekend of Thanks.”

Doug has realized a unique concept for the re-opened Lattavo Gallery. He opened the Gallery inside the barrel room of Maragas Winery on Thanksgiving. “It may be the first art gallery in a Barrel Room in the Country. We limited the barrel stacks to three high and mounted the paintings above the barrels all along the walls – out of harm’s way of an accidental wine splash from a barrel. Uniquely at our barrel room, we also use low humidity to intensify the flavors in our wine which protects the painting frames from warping.”
Art that will be initially displayed in the Gallery will include several paintings by Lattavo, Flynn, Lessig and McDonald. Combined, it’s a beautiful harmony – fine art and the art of wine making.