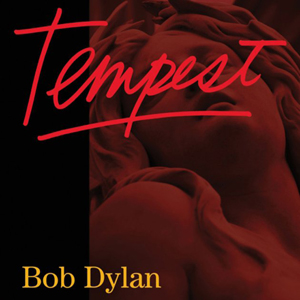 What can you say about Bob Dylan that hasn’t already been said, other than to admire the maverick iconoclast and revel in the fact that he is still very much alive and kicking, as unequivocally demonstrated in his latest release. Review by Simon Lowes.

The Tempest finds the 71-year-old master provocateur at the top of his game in one of his finest offerings in the last two decades of a 50-year and counting musical odyssey.

The 10-track Tempest – there’s a metaphorical storm raging throughout the work – finds Dylan in fiery mood, with surprisingly rich, seasoned growling vocal strength and often brilliant yet dark, foreboding lyrics tinged with ironic humor and framed against a traditional backdrop spanning an exquisitely evoked landscape of blues, rockabilly, folk and country, expertly drawn by his adept backing band and spiced up by the addition of Los Lobos’ David Hidalgo.

Dylan’s early classic Highway 61 Revisited paid homage to the storied route linking his Minnesota birthplace to Southern cities famed for their musical heritage, including St. Louis, Memphis and New Orleans, and he glories in unabashedly harking back to that harmonic heartland here alongside a raft of new original songs, all self-penned except for the opener Duquense Whistle which he co-wrote with Robert Hunter of Grateful Dead fame, and which sets the tone for an album of driving, complex blues-based music suffused with the power of poetry where the words are rightly elevated front and center.

When he cries: “Listen to that Duquense whistle blowing/Blowing like it’s goin’ to blow my blues away/You old rascal, I know exactly where you’re going/I’ll lead you there myself at the break of day” to a chugging pedal steel railroad beat, you get wind that we are to see the cultural court jester at the height of his abilities – an assured whirlwind force despite the vagaries of a life spent in the spotlight.
Flashes of sardonic humor are juxtaposed with shifting bloody and bawdy images and lyrics full of riddles and contradictions, from the lovelorn ballad “Soon After Midnight” to tracks such as the rocking Long and Narrow Road where he witheringly proclaims “If I can’t work up to you/You’re surely going to have to work down to me someday” amid a grinding Chicago Blues riff.

Pay in Blood is a standout of murderous intent, while Scarlet Town is more vintage bard, vividly evoking a strange and forbidding place, as Dylan puts it “under the hill,” with weird imagery enhanced by a banjo and fiddle backing.

The disturbing atmosphere of Scarlet Town felt somehow akin to the 1955 movie classic Night of the Hunter with Robert Mitchum as a menacing tattooed preacher figure. And indeed there is much apocalyptic portent and religious fervor spattered throughout Tempest, with Dylan at times spouting with the force of an Old Testament firebrand.

In the startling centerpiece Tempest, over 50 verses on the sinking of the Titanic set to a spare waltzy melody, he says, “They waited at the landing/And they tried to understand
/But there is no understanding/On the judgment of God’s hand,” and “They battened down the hatches/But the hatches wouldn’t hold/They drowned upon the staircase/Of brass and polished gold.”
The body count piles up by the end of the seven-minute 28 verse lover’s double-crossing tale Tin Angel while the vitriol is also amplified in songs like Early Roman Kings which could be construed as a searing indictment of unscrupulous bankers – “They’re peddlers and meddlers/They buy and they sell/They destroyed your city/They’ll destroy you as well.”

Long and Wasted Years bleakly catalogs a broken marriage, while the album concludes with the heartfelt tribute to John Lennon, Roll on John, which intermingles extracts from the famous Liverpudlian’s songs and history.

Lennon would perhaps be proud that his contemporary has lost none of his creative drive and cutting edge, much in the same vein of his riposte to Dylan’s embrace of born-again Christianity Gotta Serve Somebody – from the gospel-influenced 1979 album Slow Train Coming – when the former Beatles front man released his response: Serve Yourself.

But Dylan does serve his audience well and this latest tour de force helps cement his place as hero Woody Guthrie’s greatest disciple and a true voice of the American spirit, covering the infinite sweep of humanity.

A national treasure, Dylan is still surprising after all these years, and we can’t help but welcome his sentiments when he sings: “I ain’t dead yet/My bell still rings/I keep my fingers crossed/Like early Roman kings.”