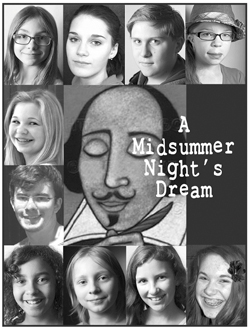 BEAT (Bend Experimental Art Theater) is presenting A Midsummer Night’s Dream by William Shakespeare, adapted by Steve Dooner. This play will be directed by David DaCosta. Last summer he brought to life the musical, HONK! (also produced by BEAT). This summer, he is taking on the challenge of teaching Shakespeare’s vernacular to young actors with ages ranging from ten to 16.

One might think that William Shakespeare was under the same sort of influence when writing A Midsummer Night’s Dream as Lewis Carroll was when writing Alice in Wonderland. The adventures in both literary works are not necessarily based on everyday life with a beginning, middle and an end, but in delightful, pure fantasy scenarios animated with unique characters and plenty of comedy.

DaCosta will be using a condensed version of the original script written by a classically trained actor, a professor of literature at the University of Massachusetts and a scholar of Shakespeare’s works. This comedy was easily abridged without losing any of it’s flavor. The setting of the adaptation takes place in 1950, with no change to the language. The first week of rehearsal was very academic, to study the words of Shakespeare and give the actors a more full understanding of what they are saying, thus perform a more believable and enjoyable characterization while on stage. David’s experience includes directing this version of the show with children in Massachusetts and acting in it while touring the east coast with a company of adults.