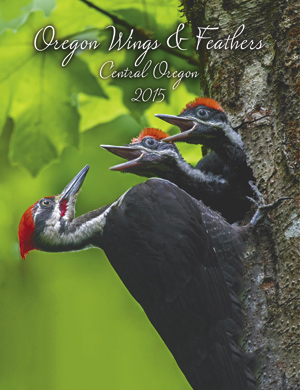 Douglas Beall has been looking for a second Pileated Woodpecker nest ever since he first saw the first one in 1970. This year, he found it – populated by mom, pop and three babies – and its photograph is the cover image for Beall’s Oregon Wings and Feathers: Central Oregon 2015 calendar.

This is the fourth year that Beall has produced Oregon Wings and Feathers calendars and the first one he’s created specifically for Central Oregon. All photos were taken in Oregon and all proceeds from Central Oregon calendar sales will be donated to Elise Wolf’s rehabilitation facility, Grebe Acres Wild Bird Care (www.grebeacres.org).

Beall moved from Salem to Camp Sherman in May, but he’s been commuting to this area for many years to enjoy and photograph wildlife. A retired landscape contractor, Beall (pronounced Bell) has always had a camera at hand – in the 1970s it was a 4 x 5 film camera and a lot of black-and-white film; when raising a family with his wife, Marybeth, it was a 35-mm Pentax, moving to digital format in the 1990s. As with any hobby, his grew gradually, until a trip to Hawaii in 1999 introduced him to the beauty of birds. Several camera upgrades later, he’s dedicating a good portion of his life to that which has become more than a hobby.

Photographing birds requires a lot of time and persistence. Once Beall discovered the nest of the Pileated Woodpecker (Dryocopus pileatus), west of Camp Sherman toward Suttle Lake, he went back nine times, spending an average of five hours each time. He calls himself a “visual naturalist” whose interest in birds has grown as he’s specialized in trying to capture their many moods and attitudes. Beall loves to photograph dragonflies, butterflies and all sorts of wildlife, but birds are his favorites.

During November, Beall’s photographs, Endangered Species, will also be on display at the Sisters Public Library, sponsored by the Friends of Sisters Library. These birds were photographed in Oregon, Wisconsin, Florida and Hawaii. All of these birds exist in a precarious balance as their habitat shrinks as a result of human development and global warming.