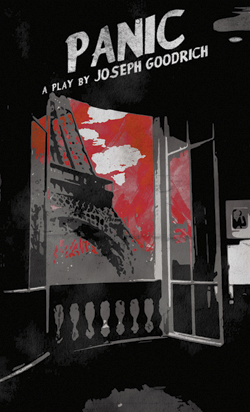 A Paris hotel room in 1963: a famous American movie director is being interviewed by a French critic who, due to his history of harsh criticism, is generally not well liked by the film community. The relationship between these two, however, is surprisingly amicable. Or at least, it appears to be. A loyal but infirmed wife, a strong and loyal secretary, a mysterious woman, a serious accusation, a letter opener. You do the math.

Panic opens October 10 and runs through October 25. Tickets can easily be purchased online with no fees at cascadestheatrical.org, or by phoning the box office at 541-389-0803. Adults $20, seniors (60+) $16, and students $13. October 9 is preview night, where theatre-goers can watch the final dress rehearsal for $10, paid at the door. All performances begin at 7:30pm.

The next show in Cascades Theatrical Company’s Main Stage lineup is Humbug. Auditions will be held at CTC on Monday and Tuesday, October 20 and 21 at 7pm. The requirements are six women, five men, and one young actor to play a nine-year-old boy. Humbug runs December 5 through December 20.

A special Halloween treat is the All Aspects Teen Theatre production of William Shakespeare’s Land of the Dead: The True and Accurate Account of the 1599 Zombie Plague. Students produce and star in this spooky and cleverly-written show that runs October 30 through November 2. Tickets for this event are frighteningly cheap at $8. Zombies wanted.