Company was among the first musicals to deal with adult themes and relationships. An honest, witty, sophisticated look at relationships, Company is as contemporary and relevant as ever (witness the recent hit revivals on Broadway and the West End).

Performances are Friday, June 7 through Sunday, June 23, Thursdays through Saturdays at 8pm, Sundays at 3pm, with an Opening Night Black Tie Champagne Reception on June 7 from 6:30-8pm. There is no performance on Sunday June 9.

On the night of his 35th birthday, confirmed bachelor Robert contemplates his unmarried state. In vignette after hilarious vignette, we are introduced to “those good and crazy people,” his married friends, as Robert weighs the pros and cons of married life. In the end, he realizes being alone is “alone, not alive.” 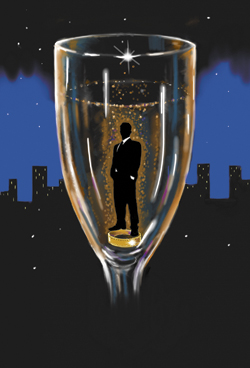 An honest, witty, sophisticated look at relationships, Company is as contemporary and relevant as ever (witness the recent hit revivals on Broadway and the West End). It features a brilliant energetic score containing many of Stephen Sondheim’s best-known songs (including Another Hundred People, The Ladies Who Lunch and Being Alive).

Company was among the first musicals to deal with adult themes and relationships. As Sondheim puts it, “Broadway Theater has been for many years supported by upper-middle-class people with upper-middle-class problems. These people really want to escape that world when they go to the theatre, and then here we are with Company talking about how we’re going to bring it right back in their faces.” The Broadway Revival in 2006 won the Tony Award for Best Revival of a Musical, among other awards.

“I have wanted to do Company since I saw it on opening night in New York in 1970, so this is a dream come true for me,” says Thoma.   “We are blessed to have this talented cast who has worked so hard to sing the impossible Stephen Sondheim harmonies, and they do it beautifully.”

Company features some of Central Oregon’s most talented performers, including David Simpson, recently seen in Cat Call Production of The Producers, Patty Davis, whose professional background includes 15 years of musical theatre and a Central Oregon favorite, Rachel Deegan, who has appeared in numerous 2nd Street Theater productions including Menopause the Musical.

Tickets are $21 for adults, $18 students/seniors