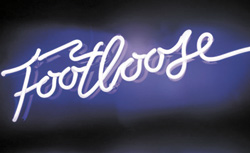 Footloose The Musical opens Thursday, February 27 and runs through Saturday, March 8. Enjoy the rock’n, rhythm of the Oscar and Tony-nominated top 40 score, augmented with dynamic new songs for the stage musical.

The Panther Theatrical Company announces its winter performance, the high energy dance musical Footloose The Musical, with music by Tom Snow and lyrics by Dean Pitchford, stage adaptation by Walter Bobbie and Dean Pitchford, based on the the original screenplay by Dean Pitchford with additional music by Eric Carmen, Sammy Hagaar, Kenny Loggins, and Jim Steinman. The play opens Thursday, February 27 and runs through Saturday, March 8. Enjoy the rock’n, rhythm of the Oscar and Tony-nominated top 40 score, augmented with dynamic new songs for the stage musical. Based on the original movie, Footloose The Musical tells the story of the lively city boy, Ren, who moves from Chicago to a small town where dancing has been banned by an anxious Reverend. After the culture shock sets in, Ren tries to gain support from his friends to overturn the extreme ban.

When the reverend’s rebellious daughter, Ariel, sets her sights on Ren, her roughneck boyfriend tries to sabotage Ren’s reputation, with many of the locals willing to believe the worst about the new kid. Footloose The Musical celebrates the wisdom of listening to young people, guiding them with a warm heart and an open mind. The incredible pop/rock score features such hits as Let’s Hear It for the Boy, Almost Paradise, Holding Out for a Hero and the hit title song by Kenny Loggins that will bring audiences to their feet – Footloose.

For the second year in a row, Panther Theatre Company is proud to offer support to the Mr. RHS/NICU fundraiser by offering featured performance opportunities for select Mr. RHS candidates, as well as special “Bomont-for-Babies” ticket pricing for audience members who wish to support both programs at once. There will also be a silent auction with proceeds shared by Panther Theatre Company and the  Mr. RHS candidates who are members of the cast.