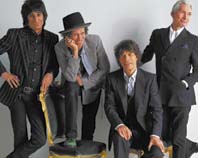 According to RollingStone magazine there’s no shortage of big names hitting the road this year, from Lady Gaga to the Who to Taylor Swift. And of course the Rolling Stones who early in May kicked off their 50th anniversary trek in Los Angeles.

The Rolling Stones’ 50th anniversary eliminates the spectacle element that has framed their tours for the last 30-odd years. Their focus seems to be musical and celebratory, a spirited romp through one of the greatest songbooks of the rock ‘n roll era against the simplest of backdrops — a massive screen obstructed at times and, for the first third of the show, the upper lip of the Stones’ tongue logo.

At their first concert, The Stones launched into Get Off of My Cloud when they hit the stage — the UCLA marching band ostensibly opened the show with a rendition of I Can’t Get No Satisfaction on the arena floor aisles – performing as a sextet with Mick Jagger, Keith Richards, Charlie Watts, Ron Wood, Chuck Leavell and Daryl Jones. In that configuration, the Chuck Berry roots of their material were front and center, a reconnection for the band with their grittier musical selves.

This year will see Jagger and Richards joining Watts as septuagenarians and their powerful opening night show proves they need not apologize for attempting to recapture their youth.

With ticket prices as high as $600, the crowd upfront hails from well-to-do neighborhoods and is likely funneling each performance through memory’s gauze. For Jagger and the guys, there must be some sense of triumph or discovery in performing Emotional Rescue for the first time ever on a tour.

When the tag of “greatest rock ‘n’ roll band in the world” was bestowed on the Stones, it owed to swagger, songs and personality. Today, they maintain it through the repertoire, Jagger’s kinetic energy, Richards’ charisma and Watts’ impeccable drumming. Filmed testimonials from Iggy Pop, Perry Farrell, Johnny Depp, uber-fans and other celebrities are shown at the beginning of the concert talking about the band’s impact and memories.