Shelley Cline’s arrival in the Bend art scene has been as much a surprise to her as it has been a form of connecting to a deeper sense of self. Her first show at Bend Furniture Design was during December’s Art Walk, by the end of the evening, her work had sold out.

The Guardians, as Cline calls her ceramic found-object sculptures, have come out of her experiences with love, loss joy. Last fall, in the midst of a very painful time following the death of her sister, loss of her father-in-law the ill-health of her father, she began to sculpt. “Out of the greatest pain came a lot of creativity,” Cline said. “My art was an expression of that. The pieces are more about connecting with who I am my experiences.”

Cline points to a specific moment that began her interest in portraying indigenous people – purchasing a coffee table book on self adornment a few years ago. Amazed with the scarification, tattooing, painting body modifications from around the world, she knew she would some how work with this inspiration in the future. 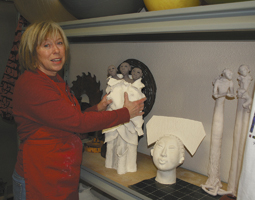 Although tribal in nature, she avoids assigning a specific tribe to the figures. “I really do believe we are all part of some tribe, whether that be through family, friends, DNA or geographical location,” Cline said. “I think the indigenous peoples from all over the world are, in many ways, more in touch with these basic instincts needs  their own spirit – maybe because their survival often depends upon it…these primitive pieces seem to be able to allow others a glimpse into their own soul form a connection with who they are or were or want to be.”

Cline has always dabbled in art, but it wasn’t until a move back to her home state of Montana five years ago that she became enthralled with ceramics. In Helena Cline began volunteering with the Archie Bray Foundation for the Ceramic Arts. “I fell so head over heals with ceramics,” she explains. Although she her husb only stayed in Helena a few years Cline immersed herself in the ceramics world.

The move to Bend interrupted her creative flow, even after her husb gifted her with a kiln slab roller, Cline found herself detached from the clay. During a visit with a Reiki therapist, she heard, “You are an artist, you have such blocked energy…once you release this energy you will blow everyone away.” A week later she picked up some clay created her first guardian. “When I finished it, I cried. I felt so much,” she said, “I made most amazing piece I could not get it out quickly enough… it’s been like that since the fall.”

Heather John Cushman at Bend Furniture Design expressed interested in the first figure, shortly after, Cline had her first show. Although many of her sculptures to date are African in nature, she is excited to work with tribes ideas of beauty in other cultures, specifically Asia.

Her sculptures are created from large metal pieces, bits of found objects clay, she spends hours at Swift & McCormick metal yard looking for painted weathered stainless steel scraps. “I like the ceramics being part of the earth, the steel being from another age. It’s the modern the primitive – they are connected too,” said Cline. By really paying attention, she believes she can find the meaningful connections between objects emotions…between junk art.

Cline would love to start doing public installations. She has always been involved in charity work is also considering creating sculptures available for auctions. “I really like that idea of being able to donate art. When something sells it gives you satisfaction that your work is worth purchasing, money is not the motivator for me.”

“I used to think of myself as a storyteller…I now see myself more as a narrator. I create the figures, ( they are, indeed, part of who I am) but the stories they tell are the sole interpretation of the individuals who connect with them. In essence, these figures become their stories,” stated Cline. “I believe that is why these spirit guardians have elicited such a strong response from so many people.”