The dates for Shooting Star are incorrect, the play has ended.  The next production will be Fox of the Fairway from June 14-30. We regret the error.

This is the play by Steven Dietz that Neil Simon would have written if he had been young in the 1970s. 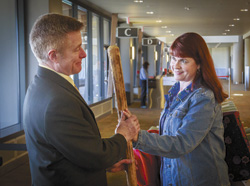 Snowed in overnight at an airport somewhere in middle America, former college lovers Elena Carson and Reed McAllister have an unexpected and life-altering reunion…

“Dietz’s gift as a writer is an acute attention to our modern language. He elevates ordinary conversation to a kind of music. Dietz makes reality poetic.” – Austin-American Statesman

Steven Dietz plays and adaptations – which include Lonely Planet, Private Eyes, Inventing Van Gogh, Dracula, Force of Nature, Halcyon Days, and The Nina Variations have been seen at over 100 regional theaters in the United States, as well as Off-Broadway. Recent work includes Fiction (produced Off-Broadway by the Roundabout Theatre Company); and several widely-produced adaptations: Honus And Me (from Dan Gutman), and Sherlock Holmes: The Final Adventure (from William Gillette and Arthur Conan Doyle).

Produced by Cascades Theatrical Company
At the Greenwood Playhouse
May26-June 12
Tickets are available at www.cascadestheatrical.org
Or phone the box office at 541-382-0803