Storyteller Lawrence Howard of Portland Story Theatre will be in Bend for a one-night performance April 5 of the extraordinary tale of Ernest Shackleton, a polar explorer who led three British expeditions to the Antarctic, and was one of the principal figures of the period known as the Heroic Age of Antarctic Exploration. 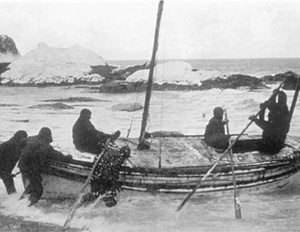 In his one-man show, Howard will take us on the journey of Shackleton’s Trans-Antarctic Expedition of 1914. Shackleton’s dream of being the first to cross the Antarctic continent on foot became a nightmare when his valiant ship, the Endurance, was crushed in the pack ice of the Weddell Sea. The story of how he and the 27 men of the expedition survived on the ice and eventually came to safety is an epic tale of hardship and suffering, courage, determination and fortitude.

2014 is the 100-year anniversary of the expedition and there have been documentary films and discussions through out the year. Those who know Shackleton and those who don’t will be equally enthralled with this adventure.

The show is over 2 hours with an intermission. Appropriate for adults and children over 14